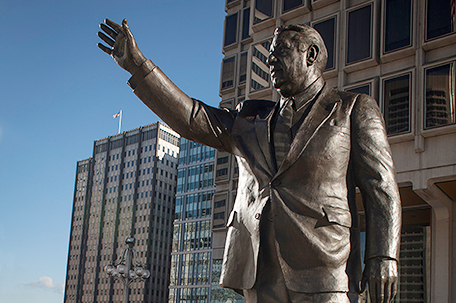 PHILADELPHIA (AP) — Police are investigating after someone vandalized the statue of former Philadelphia Mayor Frank Rizzo.

The 10-foot-tall (3-meter-tall) bronze statue stands outside the Municipal Services Building, across from Philadelphia’s City Hall. The statue was defaced in 2017.

Rizzo served as mayor from 1972 to 1980. Supporters say he was tough on crime while critics say he discriminated against minorities.

The statue is set to be moved to another location in 2021.