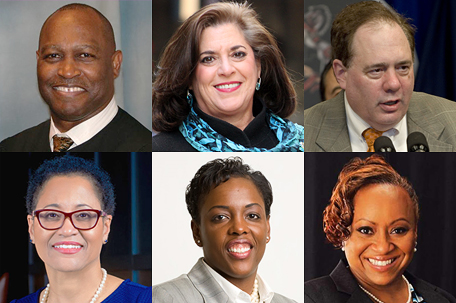 In an election where the issue of law and order dominated, several local and statewide judicial slots for the general election were filled during Tuesday’s Pennsylvania Primary.

In the statewide judicial races, 12 candidates for state Supreme Court, Commonwealth Court, and Superior Court bested six other opponents and will face off in the general election on Tuesday, November 7th.

Former Pittsburgh Steelers cornerback and Allegheny Court of Common Pleas Judge Dwayne Woodruff and incumbent Sallie Updyke Mundy, who was appointed to the Court by Gov. Tom Wolf in 2016, won their Democratic and Republican primaries for State Supreme Court. Both were unopposed.

In the race for Commonwealth Court, Philadelphia Common Pleas Judge Ellen Ceisler and former Pittsburgh Municipal Court Judge Irene McLaughlin Clark bested four other candidates on the Democratic ticket. They will face off in November against Delaware County Court of Common Pleas Judge Christine Fizzano Cannon and Allegheny County attorney Paul Lalley, both of whom ran unopposed on the Republican ticket.

Should she become a Commonwealth Court Justice, Ceisler would be the lone judicial representative of the Commonwealth’s largest city. That shouldn’t be the case, she said.

“There are nine elected judges on [Commonwealth Court],” Ceisler said. “Only one of those elected judges is a Democrat, and there is nobody from Philadelphia on that court. So, we don’t have a voice…so I’m really working hard statewide to bring a [local] voice to this important court.”

Should Judges Woodruff and Nichols win their seats on the Supreme and Superior Courts respectively, Pennsylvania will make history as the first state in the nation to have two African-Americans serving on these high courts concurrently.

Vince Furlong cross-filed and won on both the Democratic and Republican tickets.

In the race for Municipal Court, Marissa Brumbach and Matt Wolf bested seven other candidates. Although there were no official Republicans running in the primary, 52 write-in votes were cast.

Although judges don’t legislate from the bench, they play a crucial role within a functioning criminal justice system. Therefore, the matter of criminal justice reform also looms large when placed in the context of the upcoming November election.

This year’s Pennsylvania Primary was probably the most important in recent memory because of the emphasis it placed on criminal justice, especially for reformers, State Rep. Jordan Harris said.

“[At the local level] the District Attorney can decide whether they go to diversionary programs, or whether they are charging people…judges are [also] important; they have a lot of leeway when they are in their courtroom,” stated Harris.

In fact, Judge Clemons said, a judge’s attitude toward criminal justice reform might be the most important issue for people to consider when choosing judges for the Court of Common Pleas in November.

“As a Court of Common Pleas judge, you have an enormous opportunity to be able to fashion appropriate sentences for people,” she said. “So, we have to be able to determine what is the right sentence for this person. People with mental illness need treatment while incarcerated, and as a judge, I always try to make sure they get it, and that they stay in treatment.”

Judge Clemons explained that while there are people out here who must be incarcerated because they are a danger to our community, many people are committing crimes because they are sick or can’t find a job and that these factors need to be taken into consideration during the sentencing process.

“We as a society and me as a judge have an obligation to help them…we have too many non-criminals in the criminal justice system,” she said.

Ellen Ceisler pointed out that the Commonwealth Court handles state prison and parole issues, among many others.

“It is the court of last resort for anyone who is in state prison or dealing with parole issues,” she said. “It is also the court that handles the Correctional Officers Union issues. From my perspective, as a Commonwealth Court Judge, you’re dealing with individuals that are making their last case in a dispute against the government. So, what you need on this court are people who are going to look at the case, no matter where it comes from, no matter who is filing it.