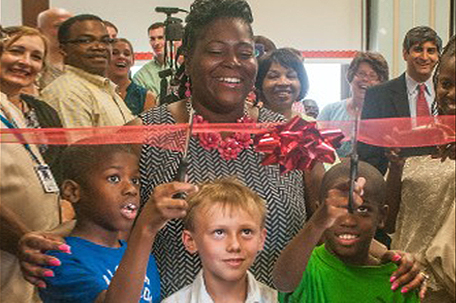 On Friday, Sept. 5, I had the pleasure of joining more than 50 community leaders, teachers, advocates, parents and students of the Mt. Airy Schools Coalition (MASC) for the grand opening of the Emlen Elementary School Computer Lab.

The lab has been furnished with 33 new iMacs, an upgraded technology network, individual data storage for students’ work, and a décor reflective of the diverse community surrounding the educational institution; all with private donations from local residents who are working to fill the gap left by the consistent underfunding of public education in our commonwealth.

As extraordinary as this initiative is, the computer lab only stands to serve a mere fraction (0.0038%) of the more than 131,000 students enrolled in Philadelphia’s traditional public schools. And while this project serves as a premier example of effective community engagement, it does not address the chronic issues Emlen and all city schools face as students have returned for another school year of crowded classrooms and outdated technology, as well as one-day-a-week medical staff and counselors.

To avoid further degradation of the commonwealth’s largest school district, I urge my colleagues in the General Assembly to take immediate action to provide our local government with the authority to enact a cigarette tax for Philadelphia’s schools when we reconvene on Monday, Sept. 15.

In July, I expressed my disappointment with the decision to cancel a special voting session, which would have provided the city of Philadelphia the enabling authority to generate additional recurring revenue for the school district by enacting a $2-per-pack cigarette tax; estimated to produce an additional $83 million to support our students.

Yet, the School District of Philadelphia opened its doors this past Monday without the funding and with much uncertainty, more students in already oversized classrooms and less classroom support staff, public safely officials, access to post-secondary resources and much-needed transportation assistance.

Gov. Tom Corbett, as well as Democratic and Republican leaders in the House and Senate have acknowledged Philadelphia schools are in dire need of funding to provide adequate academic and social resources to our children. There is no need for further delay in providing that funding.

The School District of Philadelphia has lost more than $590 million, or $2,930 per student in education program funding since the governor took office in 2011. School funding for Philadelphia on a whole has been cut by $1.12 billion, or $5,547 per student. Additionally, with every week the passing of the cigarette tax is delayed, our students and teachers lose an additional $1.26 million in support.

I acknowledge that this cigarette tax was never intended to be the ultimate solution to the School District of Philadelphia’s fiscal crisis. However, the current administration’s decision to abandon the public school funding formula, among other poor choices, created a dependency on local resources to adequately fund our public schools. In addition to the city’s 1 percent sales tax extension, the city of Philadelphia has been forced to increase local property and business taxes, as well as direct appropriations, to address the repeated shortcomings in state funding for education.

And while the Basic Education Funding Commission is working to develop a new and equitable, needs-based funding formula for all 500 school districts in the commonwealth, our schools cannot afford to wait. We cannot continue to delay these efforts; we need immediate, recurring, reliable revenue now.

As the chairwoman of the House Philadelphia Delegation, I assure readers that members of the delegation remain committed to getting the legislation passed to authorize the city to enact this $2-per-pack cigarette tax to help fund schools. House members are looking to pass a clean version of H.B. 1177 that includes the cigarette tax legislation with no expiration date and other strings attached. I applaud the efforts of MASC, and similar city and regional organizations that have stepped up to the plate. I implore our state leadership to do the same and make public education funding our number one priority.