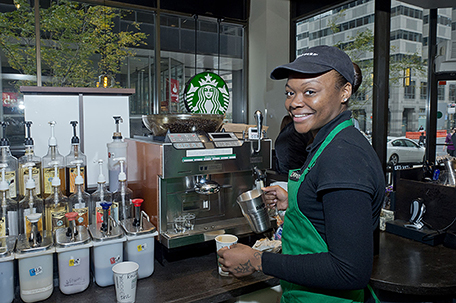 Carmen Williams was on the road to nowhere.

Left at a friend’s home by her mother as a child, Carmen endured myriad foster homes, including a household crawling with 30 unneutered cats. One day, she came home to discover the cats had soiled all of her high school uniforms. When she asked for $5 to get them washed, she said her foster parent refused to help.

So, she dropped out of school – not because she didn’t want to learn – but because she had nothing to wear. That’s how precarious life can be for youth like Carmen.

But today, the 21-year-old student’s uniform of choice belongs to Starbucks, where she works as a barista in the heart of the city’s business district. Her life has been fortified by a student support system that includes Starbucks, Community College of Philadelphia and YouthBuild Philadelphia, an alternative charter school that provides life skills, coping skills and a chance for older students to earn their diplomas and a career skill.

Yesterday, Carmen was a guest speaker at Community College of Philadelphia’s Fall Pathways Magazine Breakfast, which brought Starbucks, YouthBuild and the College together to talk about the universal issue that all big cities face: how to put youth, disconnected from work and school, onto a pathway to employment opportunity.

Carmen’s story put a face on the disconnected youth in America who far too often are invisible in urban centers. Audience members were moved to tears as they watched a video chronicling her amazing life’s journey – one that has taken her from dropout and exotic dancer to her high school’s salutatorian, prom queen and Starbucks barista.

In Philadelphia, one out of four young people between the ages of 18 and 24 are unemployed and out of school. “Opportunity Youth represent a huge, untapped opportunity for an infusion of productivity and creativity in the workforce,” said Starbucks District Manager Michael Scott, who said the company has hired about 50 Opportunity Youth from the Philadelphia region in the past two years.  “We cannot drive performance sustainably if this group of young people is not engaged. They represent our future workforce as well as our future customers.”

In Philadelphia, Starbucks is partnering with a number of nonprofits that serve this population, including YouthBuild. “I found YouthBuild when I was 16 years old,” Carmen explained. “I was introduced to the sex industry to support myself… one of my coworkers who was also a dancer told me about this school she went to and how they cared about her so much.”

With the job market tightening and the U.S. unemployment rate recently teetering at just over 5 percent, the value attached to the Opportunity Youth pipeline is increasing as the strategy allows businesses to transform the lives of families and boost their own fortunes by providing opportunity—rather than handouts—to those in need.

In the United States alone, there are 3.5 million unfilled jobs. Jobs that do not require a four-year degree—sometimes called middle-skill jobs—make up the largest part of the labor market. This year, a coalition of business leaders launched the 100,000 Opportunities Initiative, which promotes the gospel of opportunity hiring and is working to create more flexible hiring systems that can overcome unconscious barriers to candidates that might have unusual life circumstances such as homelessness.

Major employers, including Starbucks, Target and CVS, have created the first large-scale employer-based effort to engage disconnected youth in the labor market by making investments in their potential through education, training and work experience in an effort to raise their level of employability. These U.S.-based companies have committed to hire at least 100,000 “Opportunity Youth” by 2018.

The Starbucks regional district including Philadelphia, which includes portions of the Mid-Atlantic, is a constant hub of activity as district managers form new alliances with nonprofits in an effort to fill the opportunity pipeline. It recently expanded its partnership with YouthBuild Philadelphia to include a program that prepares students for careers in retail and customer service by providing classroom and on-the-job training in a café setting, based on a similar training approach that Starbucks baristas receive in stores around the world.

Carmen, who recently gave birth, has her sights set on earning a degree from Community College of Philadelphia. Already, she has put lessons learned in a Psychology class to use behind the counter as she connects with customers. In just a few years, she replaced hurdles with hope, and found a purpose: sharing her new direction in an effort to prove that in every Philadelphia neighborhood, a better future is within reach.

At work, Carmen has been promoted once already, to barista trainer. She is working with her store manager on a plan for additional professional development.

“Where I see myself in the future?” she said, repeating the question. “I can’t even picture it right now. With the people I have now that love me and support me and care about me and motivate me and push me, when I can’t push myself, I might be the President.”

As she stood in front of the audience yesterday, however, her thoughts drifted to the friends she has who have not yet found their path – they want to work, want a better life but have not yet found people to support them, as she has.

“I wish you could meet the people I know,” she said. “As much as you love me and love my story, you can believe in and invest in other people who come from where I come from as well.”