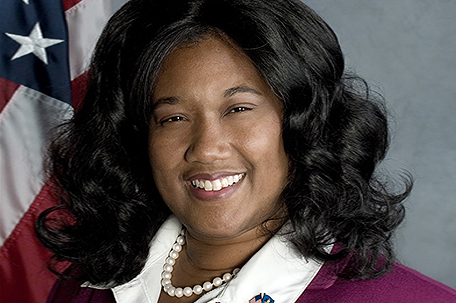 While the rest of the world looks at State Rep. Vanessa Lowery Brown and sees an elected official battling bribery charges, her constituents see a woman who works hard for them and deserves another two year term, she said.

As she approaches her campaign for her third term as State Representative for the 190th Legislative District, it would be easy to write off Vanessa Lowery Brown.

She was one of four state legislators charged with criminal conspiracy, bribery, conflict of interest and failure to make require disclosures on statements of financial interests. The other three legislators—State Reps. Michelle Brownlee, Ron Waters and Louise Williams Bishop—have pled guilty and resigned their seats, but Brown has opted to go to trial.

It would be easy to think that because of this, Brown’s constituents would have lost confidence in her.

But if you did, Brown said, you’d be wrong.

“The response that we’ve been getting is really positive,” she said. “They tell me that they want to hang on to me and for me to continue providing the constituent services that I provide.”

In an interview with the SUN, Rep. Brown talks about her proudest moments as a legislator, how she views constituent service, and how her constituents have kept her from feeling down in light of the legal cloud hanging over her head.

SUN: Thank you for your time, Rep. Brown. I understand that you’ve opened a new campaign office to start your run for a third term in the State Legislature. Where is it located and how are things working out?

Rep. Brown: Our new campaign office is located at 4153 Lancaster Ave. We’ve been on the campaign trail and our staff has been out getting the petition signatures we need to get on the ballot.

SUN: If I were a new constituent coming into your district and I wanted to know why I should vote for you, what would you tell me? What do you believe are your crowning achievements during your last two terms in your office?

VB: There are two development projects that I’m proud of. I was able to secure two $1 million allocations from the Commonwealth. One was used to renovate the Smith Memorial Playhouse. This is a building that was put in a trust by the Smith Family so that children from economically disadvantaged families would have a free place to play. It needed a transformation. The play area was expanded and it was historically preserved. To see children enjoying that facility is my proudest moment.

The other $1 million allocation went to Spectrum Healthcare Services. Spectrum Healthcare had outgrown it’s space and was looking to expand. But in order to get matching funds, they needed $1 million. Now, they have a three-story building that offers healthcare for anyone in the community regardless of ability to pay. Everyone I know goes there and receives medical care. It also led to jobs for people in the community.

I’d also tell them that I’m an out of a box thinker who believes that constituent services have to come from the view of the of the people who need them. For example, when I found out that young ladies in my neighborhood weren’t able to go to the prom because they couldn’t afford a dress, we started to get prom dresses for them. We’ve also started getting suits for young men who want to go the prom and can’t afford a suit. We also help the girls get their hair and makeup done so that they can participate in this rite of passage. We’ve helped thousands of young men and women go to the prom. We’ve also partnered with a Christmas tree distributor in the district to provide Christmas trees to families that can’t afford them. Small things mean the most.

SUN: While you’re running for re-election, you also have a legal situation that you’re currently dealing with. You were charged along with several of your colleagues with accepting a bribe and other charges. Has that reality complicated your relationship with your constituents?

VB: No, it hasn’t. Most of my constituents know about it, but what I get is “Rep. Brown, we believe in you. We’re praying for you.” Their prayers have kept me sane through this process.

SUN: Do you know when you’ll be going to trial?

VB: A date hasn’t been set yet. That’s up to the Dauphin County Courts. I have no power over that.

SUN: Thank you for your time Rep. Brown. I really appreciate it.