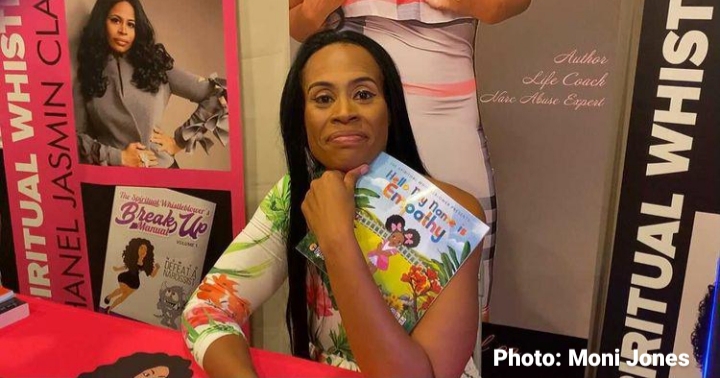 The seven-time author and life coach, known on social media as “The Spiritual Whistleblower,” is setting the digital world and globe on fire by putting narcissism on blast; and helping victims who have been abused by them spiritually, emotionally, physically and financially.

In three short years, the world has taken notice of Clark’s work as evident by her grueling international tour schedule that has taken her from London to Los Angeles, Las Vegas, Portland and Puerto Rico to name a few. Her tour will also be coming to Jamaica soon.

Even celebrities are catching on, sometimes commenting on her daily Instagram posts that are lively and blunt to say the least.

Yes, Clark who has been living in New York for past the two decades, drops profanities in her daily posts of wisdom which includes her sharing her personal stories of pain inflicted on her from family and past romantic flames. She has definitely turned her pain into purpose.

“Narcissists are very highly selfish individuals that lack empathy, lack remorse, have no accountability and are just highly manipulative because they were taught these behaviors in their youth,” said Clark.

Clark calls these abusers “narcs” who have narcissistic personality disorder or NPD. She also notes there is no cure for persons who are narcissists.

On the Friday evening group session, Clark broke it down for the intimate Narc Abuse Support Group gathering held in the Germantown section of Philadelphia.

Attendees shared their stories of horror and triumph of surviving the experience of being entangled with a narcissist whether it be a toxic co-parent or a toxic parent—and yes, that toxic ex that just won’t go away to name just a few situations that were shared.

Why is this type of support group needed?

It is very intimidating to take on a narcissist. They are vicious in their attempts to manipulate and control and will go through any lengths to keep access to their victim’s lives including via mutual friends or third parties.

“That’s why I do these groups so people can come out of isolation and meet others, and you can feel validated,” said Clark.

“It’s starting to go down and these narcs are terrified.”

“Now they [narcissists] got to a point where they’re now telling people that they are narcs because they got to figure out a way to manipulate people. People are catching on—and social media is exposing them left and right,” continued Clark.

Narcissism exists on a spectrum.

“There are different types of narcissists,” explained Clark.

“There’s covert, overt, malignant. You know we have religious narcs.”

There are more categories of narcissists. These are a few she mentioned.

Narcissists are in all walks of life. They can be friends, colleagues, romantic partners, exes, co-parents, acquaintances, family members, in-laws, religious figures, the ex’s new partner—you name it.

For two years, Clark has been doing “the Lord’s work,” as they say, helping thousands identify the traits of a person with narcissistic personality disorder and teaching individuals how to get away from these type of people before they ruin your life.

Clark is a survivor herself, identifying her abusive mother as a narcissist who abused her physically, emotionally and financially even into adulthood.

Clark, also the proud mother of a 21-year-old, is long estranged from her family and has no regrets.

She shares her personal story to help others that may feel emotionally conflicted by leaving their abusive family members behind.

Clark has persevered through it all.

She has Bachelor’s Degree in Mass Communications at SUNY Empire State College, and a Master’s degree in Media Management at the Metropolitan College of New York. She is now pursuing a Doctorates in Addiction Psychology.

What’s next for Ms. Chanel Jasmin Clark aka The Spiritual Whistleblower?

She is taking her fight to lawmakers to change laws to help narcissist abuse victims.

“I plan on doing a petition. It’s a legal petition [in New York] where you go to every county and gather signatures, then you take it to the Governor for approval; versus submitting a bill because you have to go through the process of doing the whole bill.”

“There needs to be better laws in family court and divorce court. There’s a term called vexatious litigation where the judges and lawyers are realizing that abusers are abusing the court system to punish their victim in the courtroom. Very sick. I feel that the judges need to have a mental health professional present in the courtroom to assist with decision making.