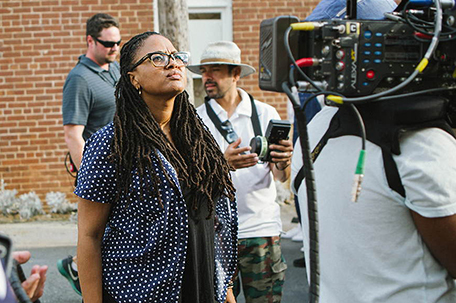 I have been a fan of director Ava DuVernay’s work for quite some time now.  I fell in love with her work immediately after seeing The Door, which tells a story about fashion, sisterhood, and healing without the use of any dialogue.  I was blown away! I wanted to see more of her work and with each additional piece I viewed, I had one thought…Ava DuVernay is a brilliant storyteller.

DuVernay’s  work continues to impress larger audiences.  With talent like hers, it comes as no surprise that she made history by becoming the first African American woman to win the “Best Director” Award at Sundance for her film Middle of Nowhere. As the director of Selma, Ava continues to break barriers and pave the way for upcoming directors by also becoming the first African American woman nominated for a Best Director Golden Globe.

DuVernay’s journey to film making is a non-conventional story that gives hope to anyone still trying to find their way. “I started as a publicist for other artists and got the bug by being on the film sets for so many other people. I thought, “I can do that”. I started my hand at filming with a short first and then I did a documentary all with my own money. I was saving up to buy a house and I bought myself a film! I made a film called I Will Follow, followed by Middle of Nowhere, then I directed an episode of “Scandal”… all that lead me to Selma. An interesting journey in a short amount of time, less than five years.”

Selma tells the story of a turning point in the Civil Rights Movement…led by the Rev. Dr. Martin Luther King Jr.  It follows one of the most brutal massacres of all time: the bombing of The 16th Street Baptist Church. The bombing, which resulted in the death of four innocent black girls, was the catalyst for an immediate move towards change. That change could only truly come once African Americans were given the right to vote. The timing for the release of Selma could not be more poignant…given the protesters surrounding the deaths of Mike Brown in Ferguson, and Eric Gardner in New York City. The outrage felt by many, as their thirst for justice continues to go unquenched, leaves many seeking answers to why we are seeing the most painful aspects of our countries’ history repeated frequently in a so called “post-racial America.” Selma is proof that art and fate are meeting at a time where we as a country need it most. “At the time when we were shooting we didn’t have Ferguson. We finished shooting in July and Mike Brown was murdered in August. There was no way to have known any of this would happen. There’s no way to know that you make a film centered on marches and the power of the people, protests, and civil unrest and that all that would be happening in the real world at the time the film was coming out.” Ava continued by adding “In our adult life times we’re seeing people take to the streets like they did in the 60’s with Vietnam and it’s beautiful. I’m so happy that our film has something to add to that dialogue.”

Selma is without a doubt one of the most moving films of my generation. Dr. King believed in non-violence, led the Civil Rights movement, and helped reinforce The Voting Rights Act with the power of his words, strategy, and action. Selma tells Dr. King’s story in a way that I have never seen it. Selma humanizes that struggle, and the great figure that led it by depicting the amount of sacrifice required by King and his family in order to change history.

Although many would say we have come a long way, our journey as a country is far from over! In 2014, the Edmund Pettus Bridge named after the Grand Master of the KKK still stands. The bridge that was home to one of the bloodiest displays of injustice in history known as “Bloody Sunday”, still stands. The citizens of Alabama cross it and are reminded of that atrocity everyday. Although I would love nothing more than for this bridge to be torn down or renamed at the very least, my hope is that we too are reminded. While we as a country are attempting to advance past the pain that this country’s history holds, we can only truly overcome by acknowledging the truth. We can do our part by facing America’s ugly history, the damage that it caused and is still causing and look for ways to make sure history does not continue to repeat itself. Please support the outstanding film Selma, which opens in theaters on limited engagement on Christmas Day and nationwide January 9, 2015.