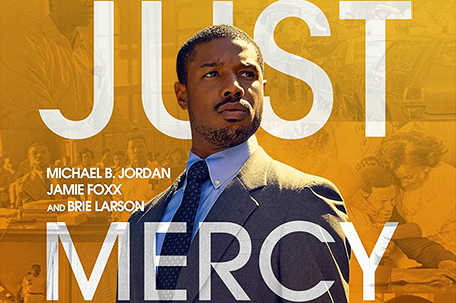 In the movie “Just Mercy,” the unjust parts of the justice system as seen through the eyes of one man take center stage.

During the 2019 Philadelphia Film Festival, Bryan Stevenson, the founder of the Equal Justice Initiative, was the recipient of the festival’s first Humanitarian Award.

The award was the festival’s way of acknowledging the impact that Stevenson and the Equal Justice Initiative has had on our discussion of criminal justice, the death penalty, and the part that racism, whether we like it or not, plays in the ‘equal” part of equal justice.

In the new movie “Just Mercy,” which was the opening night film for the PFF, Stevenson’s story is told in a film that will give people a window to have conversations about our criminal justice system, but it won’t necessarily be comfortable ones.

Based on the book “Just Mercy: A Story of Justice and Redemption,” the film stars Michael B. Jordan as Stevenson, an idealistic lawyer who decides to forgo the big bucks a Harvard lawyer can make to take up the challenge of defending death row inmates who were unjustly accused, not afforded competent counsel, or in many cases, both. He’s joined in this effort by Eva Ainsley (Brie Larson), a local activist.

He winds up taking up the case of a man who is the textbook definition of “unjustly accused’ in the person of Walter McMillan (Jamie Foxx), who is about to be executed despite evidence proving his innocence and the testimony of Ralph Meyer (Tim Blake Nelson), an inmate who has testified against him.

The film takes you through the inhumanity of the ultimate punishment — which is what the death penalty is — and how not everyone gets to use the same defenses to keep them from being impacted by it. As the daughter of a veteran, and having seen post-traumatic stress disorder up close, seeing Herbert Richardson (Rob Morgan) executed without diminished capacity being allowed as a mitigating factor kind of made me angry.

Now, a movie like “Just Mercy” has the potential to hit a bunch of land mines. It can load up on earnestness, which leads to it wearing its heart on its activist sleeve. It can turn into an origin story, which only works when superhero costumes are involved. It can also over emphasize the Black and White of the issue, which can oversimplify a film.

Fortunately, “Just Mercy” didn’t fall into those traps. It shows you the brutality of Death Row without making it so weepy that it insults your intelligence.

As it often is in a film filled with people who rarely give bad performances, “Just Mercy” is worth the trip just to see the acting. While most people will talk about Jordan and Foxx’s performances, both of which are good, the standout for me was Nelson, who portrayal of Meyer as a man who knows that telling the truth could cost him his life, but wants to do it to keep it the lie from costing someone else theirs.

“Just Mercy” is a biopic that talks about something we might not want to talk about in a way that will lead to conversations we need to have as we approach the 2020 Elections and the criminal justice reform debate.