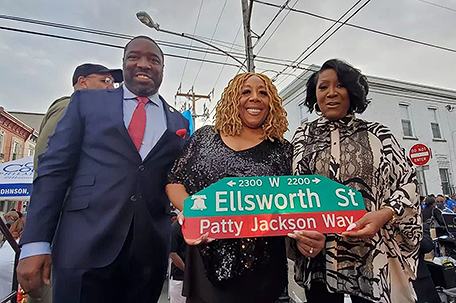 Tears poured down Patty Jackson’s face — she couldn’t help it. The 57-year-old radio personality was overcome with emotion. Jackson couldn’t believe that Grammy-award winner Patti LaBelle had actually showed up for her street renaming, which looked more like a block party.

LaBelle and a number of other local celebrities were on hand to help kick off the big ceremony.

Councilmember Kenyatta Johnson (D-2nd Dist.) welcomed the large crowd. He introduced legislation to Philadelphia City Council back in 2018 to have the 2300 block of Ellsworth Street renamed “Patty Jackson Way.” And now, three years later, the fireworks were about to begin.

It is another milestone for a radio icon, who began her broadcasting career at Southwark Motivation High School as the morning announcer for the school’s PA system. While she was a student at South Philadelphia High School, Jackson was an inspiring basketball announcer.

After graduating from high school, Jackson became a popular radio disc jockey at WSSJ in Camden, New Jersey, before working at Power 99 FM, then eventually WDAS.

The street renaming was a touching, emotional occasion for the WDAS radio legend. The celebration kicked off on October 8 and began with a mighty performance by the West Powelton Steppers drill team.

Her family and friends came from all over Philadelphia to honor Jackson, who grew up in a house located at 2212 Ellsworth Street.

Fox 29 Morning Show hosts Mike Jerrick and Alex Holley also spoke on stage. Seven years ago when Jackson suffered a massive stroke, Holley and her mother visited Jackson at the rehabilitation center bringing flowers to the facility to cheer her up.

During the ceremony, LaBelle told the crowd how she loved Patty Jackson and would do anything for her friend.

“I’m so happy to be here today,” LaBelle said. “I’m so shocked, because I didn’t know Patty Jackson was being honored today. But I’m so happy for her. She really deserves it. Patty Jackson is everything to me. She’s like a sister to me. …. she’s all of that plus a bag of chips. I know I love her. She represents Philadelphia. Congratulations, my dear. You really deserve it.”

During the ceremony, Jackson was presented with a bouquet of flowers and a proclamation from the City of Philadelphia. While on stage, Jackson spoke about her former radio boss, the late Joseph “Butterball” Tamburro and gave a heartfelt testimony in memory of Cody Anderson.

Tears poured down her face again when she spoke about Butterball.

Jackson also thanked the late E. Steven Collins and remarked that he was a powerful force in her life. Collins helped her and her family when she suffered her stroke.

When Jackson spoke with Cody Anderson two months before he died, she thanked him for hiring her.

Before she left the stage, Jackson gave shoutouts to different people in the crowd. She also remarked about not having her parents with her to share the big celebration.

Going into next year, Patty Jackson said that she is looking forward to celebrating her 40th year in radio.

“Right now, I can’t tell you how much longer I will be in radio,” she said. “I know I have bills to pay. [But] that’s enough to keep myself busy on the airwaves.”

Patty Jackson returns to the airways on WDAS FM