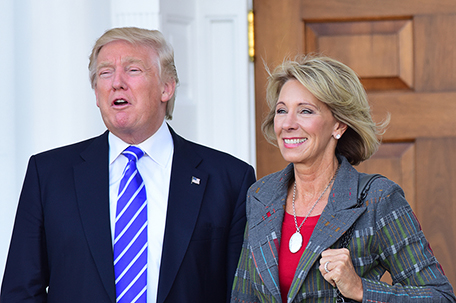 I WAS RECENTLY reminded that the one-eyed man is king in the land of the blind while reading the Philadelphia Daily News Will Bunch’s column on the “disastrous” nomination of Betsy DeVos as secretary of Education (“Trump’s new ed chief is a disaster for Philly”). To believe Bunch, DeVos represents an implicit threat to public education in Philadelphia. Everyone can see that Philadelphia’s public schools are in a perpetual state of crisis and fail to meet the most basic educational needs of the city’s young people. And, unfortunately, they were in this state before charter schools, and even when they had historic funding under Gov. Ed Rendell.

While lambasting DeVos and her support of charter schools across the country, Bunch failed to address the immediate well-being of Philadelphia’s students, teachers and parents who have long suffered in a broken education system. Instead, he reverted to the same special-interest hyperbole that has plagued Philadelphia for far too long. Rather than focus on the “education wars,” let us actually work together to bring a quality education to children throughout the city.

Philadelphia schools have long suffered from racial and economic segregation that persists to this day. Studies abound that detail the plight of minority and low-income students who failed to achieve their full potential because education in Philadelphia is inherently separate and unequal.

Parents, desperate to provide a better life for their children, have sought other educational opportunities for at least a generation. They lost trust in a system that was clearly broken. Those who could afford it uprooted their families and sought refuge in the suburbs.

Those not so fortunate remain trapped in a system with few appealing alternatives. They lie about their address, risking prosecution to send their child to a school they believe in. They work multiple jobs and still struggle to pay tuition. And, yes, many have sought out charter schools. They do these things to rise above the artificial boundaries created by the Philadelphia School District with the hope that their child will flourish in a supportive educational environment.

Many dedicated public servants and private citizens are working to improve education in Philadelphia. I applaud their efforts. Yet I am continually frustrated by those who simply ignore the longstanding and systemic issues facing public education. They claim, instead, that “school reform” advocates are destroying education and seldom reach beyond their partisan entrenchments.

As the Rev. Dr. Martin Luther King Jr. said, “True compassion is more than flinging a coin to a beggar; it comes to see that an edifice which produces beggars needs restructuring.” Philadelphia’s graduation rates lag far behind national rates. The dropout rate persists. The edifice crumbled long ago. I represent thousands of children and parents who deserve substantive and immediate solutions to the educational challenges they face. They’ve waited long enough.

SOLAR FLARES: Does the Philly United Way have a Ferguson problem?