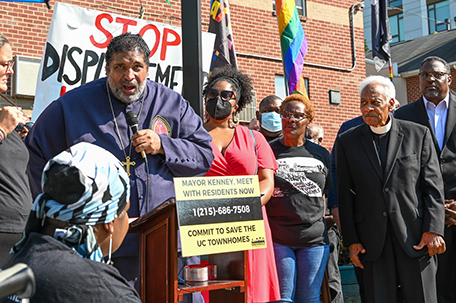 ABOVE PHOTO: Bishop William J. Barber, president and senior lecturer of Repairers of the Breach and co-chair of the Poor People’s Campaign: A National Call for Moral Revival, speaks to concerned residents about the upcoming eviction challenge at University City Town Homes on Sunday, September 18. (Photo/Joe Piette)

Faith and moral leader Bishop William J. Barber vowed to bring the eyes of the nation to the plight of Philadelphia residents facing eviction from historic and subsidized housing, offering to stay at UC Townhomes and asking other clergy members to do the same.

Barber, president and senior lecturer of Repairers of the Breach and co-chair of the Poor People’s Campaign: A National Call for Moral Revival, spoke last Sunday at an interfaith service outside University City (UC) Townhomes. The owner has ordered all residents of the buildings, which operate under HUD contracts, to leave by Oct. 7 so he can raze the property and sell the land.

“If you all invite me, I’ll come in and move in for a few days in this townhome and invite other clergy in the city,” Bishop Barber told the crowd of about 200 people and numerous clergy members. “And then we’ll call for folk to meet us here. And maybe while we’re staying here, y’all can redo that encampment for another 30 days. Since it’s in the middle of an election year, let’s make this an election issue.”

Barber was referring to an encampment that residents set up this summer for over 30 days until police broke it up.

In addition to supporting the residents, the service was part of the PPC:NCMR’s effort to reach 5 million poor and low-income people and low-propensity voters before the midterm elections in November.

Darlene Foreman said she has lived in UC Townhomes for 29 years.

“I had the opportunity to raise three children here, who are all grown up, moved out, and doing quite well,” she said. “That’s because they had stable housing. This is our home.”

If residents – who include women, children, disabled people, and those who are bedridden – are forced out of their homes, where are we supposed to go?” she asked. “There isn’t any proper low-income housing in Philadelphia to go to, anyway.”

Rev. Dr. Liz Theoharis, director of the Kairos Center for Religions, Rights and Social Justice and co-chair of the PPC:NCMR, assured the residents that they are not alone.

“We are here with you from Pennsylvania to the more than 40 states across the country that are part of the PPC, the hundreds of organizations, [and] the dozens of faith denominations which represent millions and millions of people,” she said.

“This is an act of grave injustice, and we’re here out of a moral obligation to speak against it,” Fornari said.

Instead of accepting this immoral eviction plan, residents are fighting back, and earlier this month proposed a plan to purchase the 70 townhomes. They recommend that the owner, Altman Management/IBID, sell the property to a third party that will maintain UC Townhomes as 100% affordable housing for very low-income seniors, families, and residents.

The organizers also are calling city and state officials to contribute money to preserve the property.

In addition, residents on Sunday asked clergy to sign a letter to Mayor Jim Kenney, supporting their demand that the mayor meet with them. The letter will be posted at: www.savetheuctownhomes.com.

“We support the residents’ demand that the city take action to preserve low-income, subsidized housing at the UC Townhomes and throughout Philadelphia,” the letter reads. “We are calling on you, Mayor Kenney, to commit to a process that will save the UC Townhomes and keep seniors, persons with disabilities and residents in their homes, neighborhood, and community. We urge you to immediately meet with residents in person and rise to this challenge of stopping displacement and preserving deeply affordable housing.”