So, What Is Your Plan? 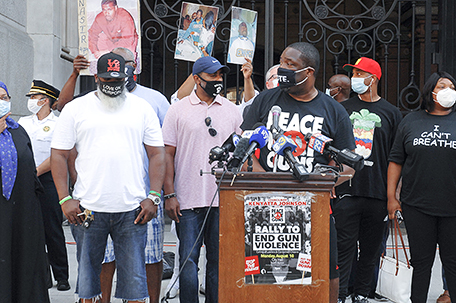 Philadelphia City Council’s Special Committee on Gun Violence held two days of hearings to find out what’s being done about a series of deadly shootings in the city. There were more questions than answers.

ABOVE PHOTO: City Councilmember Kenyatta Johnson with State Sen. Sharif Street and other neighborhood leaders and followers at the Rally to End Gun Violence on Monday. (Photo: Bill Z. Foster)

There’s a lot of things contributing to the City of Philadelphia’s current issues with gun violence and the 259 murders that have been the result of it.

Too many guns. Not enough jobs. A lack of trust between the police whose job it is to put those who shoot and kill citizens in jail and the communities that could help them do their jobs with more information.

But that’s the problem.

This week, Philadelphia City Council’s Special Committee on Gun Violence held a series of hearings designed to find out what all of the stakeholders involved — the Philadelphia Police Department, the City’s Office of Violence Prevention, the District Attorney’s Office and the Department of Probation — were doing to get the shootings under control.

After weeks of holding rallies to commemorate lives lost in his district, including a rally held at City Hall on Monday that brought together community leaders, families of those lost to gun violence, Police Commissioner Danielle Outlaw and Mayor Jim Kenney, committee chair Kenyatta Johnson decided that it was time to bring everyone together.

Especially since the number of children that have lost their lives to gun violence in Philadelphia stands at 102, including 7-year-old Zamar Jones, who was killed after being shot while playing on his front porch.

Councilman Curtis Jones, co-chair of the committee, took it a step further, saying that we need to put the same money and emphasis on the lives of young people like Zamar, who was a resident of his district, that we do on things that aren’t as important in comparison.

“We need to put our money where our mouth is,” Jones said. “I say all the time that if there were three whales had washed up on the Delaware or the Schuylkill, every marine biologist in the world would be taking tissue samples or water samples to find out why.

Over 100 of our babies were shot this year, and we’re not putting in the same effort that we would for whales and bike lanes. We can do better.”

The committee heard from District Attorney Larry Krasner and Police Commissioner Danielle Outlaw, who presented statistics and spoke about what their offices are doing to combat the problem.

In his presentation, Krasner said that one of the factors that was leading to some of the violence was connected to poverty, saying that the map outlining  poverty in the city and the map where the most shootings were occurring was basically the same map.

Krasner also cited something that’s been a longstanding problem when it comes to solving these kinds of crimes: a lack of trust between law enforcement and the people who have the information needed to solve them.

“There’s a mistrust of prosecutors,” Krasner said. “There’s a broken trust between police and the community due to a sad history of illegal stop and frisk [activity] and [the] arrest of the innocent. There are witnesses [who] do not trust and will not participate in the process.”

While the Philadelphia Police Department has been taking guns off the street through arrests, the prosecution of those who have the guns hasn’t been a sure thing. Outlaw told the committee that she has requested an analyst from the District Attorney’s office to find out why this is happening. During the hearing, The City’s Office of Violence Prevention also testified about its efforts, which include programs designed to put people in place to try and prevent shootings by interceding before violence happens.