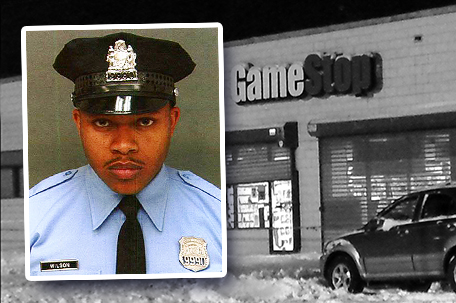 The memorial for slain Philadelphia Police Officer Robert Wilson III held at the Philadelphia Police headquarters at 8th and Race on Tuesday was a solemn affair attended by police officers, members of Wilson’s family and community leaders and activists.

The life and career of the promising officer, based in North Philadelphia’s 22nd District ended last Thursday when he was shot multiple times while attempting to stop a robbery at the Game Stop at Hope Plaza. He was in the store to buy a video game to reward his 10-year-old son for doing well in school.

A hurt and disappointed Police Commissioner Charles Ramsey heaped praise upon Wilson, calling him a good officer, a dedicated family man and a stand up member of the community.

“Officer Wilson was a hero whose selfless actions saved the lives of store customers and employees,” said Ramsey. “I knew him as a fine officer and a dedicated family man—and one of the best young officers in the department.”

“We lost a friend, a colleague—and a family member—because two criminals want to rob a Game Stop,” Bilal said. “This was a pretty senseless act. And the city loses a good, committed cop and a good man. The rank and file are sad, as is the community.”

Bilal didn’t have an answer when asked if this shooting could have been avoided.

“Police officers are human beings. The job is inherently dangerous. Officer Wilson was doing a check of the store that had been robbed before and while was in the store, he decided to buy something for his son.”

Bilal added that Officer Wilson’s colleagues are devastated. “No police officer goes into work thinking that he or she might not go home,” she said.

Bilal believes that gun crime could be seriously curtailed if the country had adequate gun control laws.  “This is the USA, a gun-totting country—but we can’t get adequate gun control because the gun lobby is so powerful. Our lax gun laws enable straw purchasers to circumvent state and local laws and put a lot of guns on the street.”

A vigil was held earlier in the week at the scene of the shooting on Lehigh Avenue by community residents in honor of the Wilson’s dedication to his job—and in appreciation of his service.  Funeral services were scheduled for this weekend.

SUN attempts made to reach Ofc. Wilson’s family for a statement were unsuccessful as of press time.