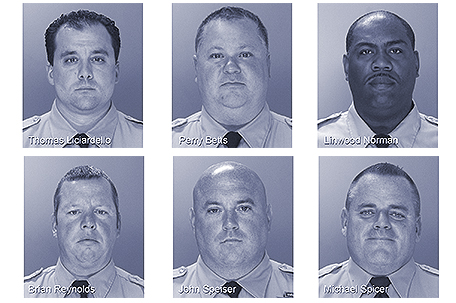 The officers once held a suspect over an 18th floor balcony and used a steel bar to beat someone else in the head, authorities said. Another suspect was held captive in a hotel room for several days while he and his family were threatened, they said.

The plan “was to identify suspected drug dealers and use extortionate means or threats to get their money and profits,” U.S. Attorney Zane Memeger said.

The scheme ran from 2006 to 2012, when Officer Jeffrey Walker was arrested. He has since pleaded guilty and cooperated in the two-year probe. Walker and a colleague “stole and distributed a multi-kilo quantity of cocaine, like everyday drug dealers do,” Memeger said.

Lawyers known to represent some of the defendants did not return calls for comment ahead of their scheduled court appearances Wednesday afternoon, when prosecutors planned to ask that they be held for at least three days until a detention hearing.

Officials said the six will be suspended by the department while police administrators take steps to fire them.

All six had been put on desk duty as the investigation unfolded, and dozens of cases have since been dismissed.

“I took them out of narcotics, but I left them … on the job,” said Police Commissioner Charles Ramsey, who attended a news conference with the U.S. attorney. “I didn’t want to do anything to jeopardize that investigation.”

The charges in the 26-count indictment include racketeering conspiracy, extortion, robbery, kidnapping and drug dealing.

Most of the defendants face at least a seven-year mandatory sentence if convicted.

But the U.S. attorney acknowledged police corruption cases can be difficult to win. He said investigators have to build a rock-solid case before making arrests because “you know that a battle is coming when you get to trial.”

“Now that the federal investigation has been completed, the district attorney’s office will review previous convictions involving the six officers and will take appropriate action,” the statement said.

Walker pleaded guilty in February to stealing $15,000 from a drug dealer in a plot that also involved planting drugs in his car. His lawyer had said he was cooperating in a wider probe of the drug trafficking unit.

Ramsey has made fighting police corruption a hallmark of his six-year tenure in Philadelphia.

Asked how he might end what has been a series of corruption cases within the narcotics unit, he complained that the police contract bars him from transferring officers between units or making other personnel changes without cause.

FBI Special Agent Edward Hanko, the agency’s supervisor in Philadelphia, said the public’s “confidence may be shaken, but it should be … bolstered” by the arrests.