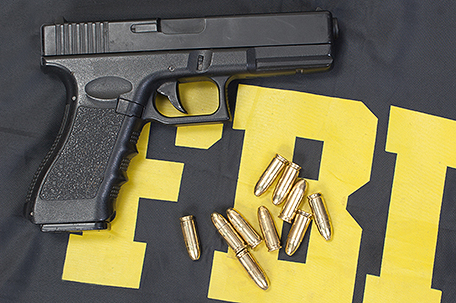 Members of the Sheriff of Philadelphia’s Fugitive Warrant Unit last night apprehended an individual wanted by the FBI in connection with a string of recent bank robberies in Philadelphia.

The suspect, Richard Cooper, was taken into custody by the warrant unit around 7:15 PM. Sunday night in an alley on the 2200 Block of E. Cambria Street.

Cooper, who was not the original target of the warrant unit, was also under house arrest before he took off recently and was being sought by the warrant unit for being an absconder on rape charges.

According to Staff Inspector Jennifer Algarin, one of the individuals involved in the apprehension, and Captain Vernon Muse, head of the warrant unit, while enroute to a two-story row home on the block to serve a warrant on an individual charged with intent to deliver drugs, the unit, which consisted of five individuals, were tipped off by an informant that Cooper was in the same house.

Further investigation revealed Cooper was also being sought in connection with no less than two bank robberies at gunpoint. Amid concerns he may have been armed with a high powered weapon, the unit also called in the Philadelphia Police Stakeout unit and other uniformed Philadelphia Police officers for backup.

Cooper was taken by the warrant unit to the Curran Fromhold Correction Facility on State Road.

“We never know what we are going to face when we go out looking for fugitives,” said Sheriff Jewell Williams.  “The fact this dangerous individual was captured without a struggle and no one was hurt is a plus for us, and a testimony to good training, but more importantly, it means that one less dangerous individual is no longer on the streets.”