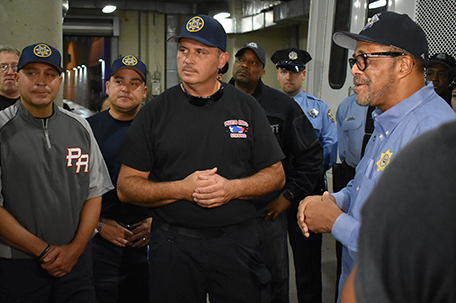 ABOVE PHOTO:  Sheriff Williams speaks to officers before they depart for Puerto Rico to aid in relief efforts.

An inspector, sergeant and two Deputy Sheriff Officers are currently deployed in Puerto Rico in the town of Rio Piedras to assist in getting supplies to those in desperate need after the devastation of Hurricane Maria.

Inspector Michael Bastone, Sergeant Joshua Perez, and Deputy Sheriff Officers Alessandro Carrasquillo and Enrique Marin have joined other volunteers under the direction of the Red Cross in Puerto Rico to assist in relief efforts for those still suffering from the devastating effects of Hurricane Maria. 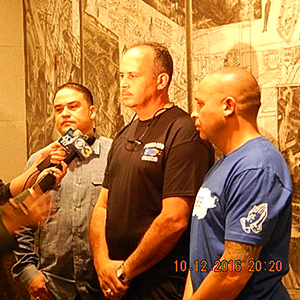 Based in the city of Rio Piedras — which also hosts the main campus of the University of Puerto Rico — the men will be assigned driving duties to transport much-needed medicines and medical equipment to different locations across the island.

All four of the men also have family in Puerto Rico.

The men left on Sunday, October 15th with an official escort provided by the sheriff’s office.

“Our hearts and prayers are with them,” said Philadelphia Sheriff Jewell Williams, “as they place themselves in harms way to help relieve the suffering of so many people still in need.”

The four are scheduled to return to Philadelphia on November 4th.