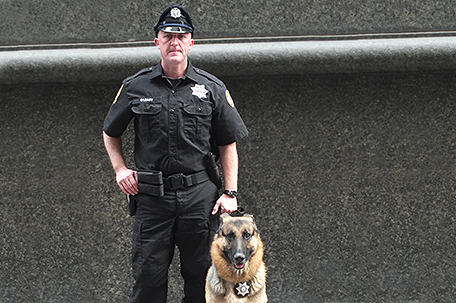 While conducting a court-ordered eviction of a home in the Olney section of Philadelphia, officers from the Civil Enforcement Unit of the Office of the Sheriff of Philadelphia City and County, came across what appeared to be two pipe-bombs and immediately ceased the eviction process to call in K-9 Blair, one of it’s three specially- trained dogs.

Handled by Deputy Sheriff Officer William O’Leary, K-9 Blair reacted positively to the pipes and police were called to bring in their Bomb Squad to dispose of the material.

“Every time we enter a home for an eviction,” said Philadelphia Sheriff Jewell Williams, “you never know what’s beyond the door. In this case, we had the proper personnel and K-9 Unit to quickly assess the situation and secured the area until the bomb squad arrived.”

The other two K-9 members of the sheriff’s office — also trained to sniff out drugs and explosives — is K-9 Carter and K-9 Jimmy.