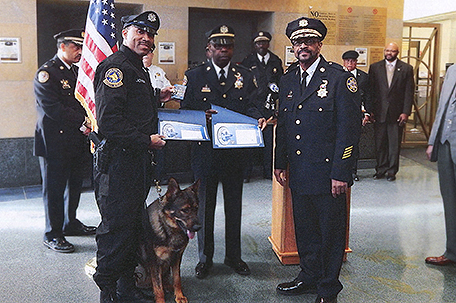 ABOVE PHOTO:  Sheriff Williams with one of the newly graduated K-9 officers being presented with a badge.

During the official recognition ceremony for the new K-9 Unit assigned to the Office of the Sheriff of Philadelphia, Sheriff Jewell Williams said the dogs are being utilized to defray witness intimidation, sniff out possible narcotics and detect explosive materials.

“In this day and age,” said Sheriff Williams,  “it is imperative that the courts and those individuals who conduct business here, are provided with as much security as possible, especially considering such places have become targets of violence over the past several years.” 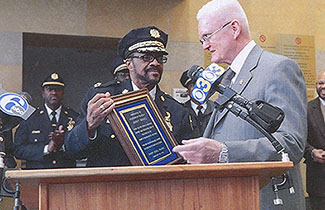 “These dogs,” he continued, “will be on the front line of that defense as they patrol the areas around the courts and the building itself.”

Sheriff Jewell Williams then presented badges to K-9 Blair, K-9 Jimmy, and K-9 Carter, who recently graduated from the Philadelphia Police Department’s K-9 Training Division and are now serving in the Office of the Sheriff of Philadelphia City and County.  The dogs are trained to sniff out drugs and explosives.  All three are male German Shepherds born in the Netherlands.

Jimmy Binns, a long-time supporter of the sheriff’s office was also honored with a special plaque from Sheriff Williams in recognition of his generosity in sponsoring the dogs and their transportation to the U.S.

“These dogs represent the type of professionalism and dedication that is exhibited in all of our deputy sheriff’s and we are proud and honored to have them in service thanks to the generous support of Jimmy Binns,” said Williams.