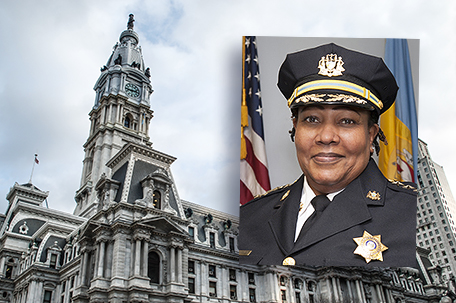 The Office of the Philadelphia Sheriff underwent an historic change in leadership when Rochelle Bilal was sworn into office on January 6, 2020. The Bilal administration inherited a host of organizational, cultural, and financial issues from the previous administration. Nevertheless, the newly elected Sheriff was up to the challenge of implementing the reforms needed to move forward.

Sheriff Bilal went to work on day one by forming a 23-member transition team to review all departments under her leadership. Surveys were issued to all departments to create a clear picture of the office’s strengths and challenges.

Today, one year later, even amid the COVID-19 pandemic, this office has made significant, quantifiable improvements and accomplishments.

There have been several organizational changes made to increase the consistency and quality of service delivery in the Philadelphia Sheriff’s Office, thanks to Sheriff Bilal’s prioritization of organizational effectiveness.

The Sheriff hired a new undersheriff who brings extensive legal experience to the position. He is equipped to address all legal challenges and concerns that the office will face.

Sheriff Bilal promoted a 26-year veteran Deputy to Chief Deputy to lead the sworn officers and law enforcement functions of the office. Under the Bilal administration, the deputies have received updated equipment and overdue training to help them become more effective in their job performance.

The Sheriff hired an experienced female Chief of Staff to implement and maintain organizational systems and protocols.

When Sheriff Bilal was sworn in, she inherited an office in need of an overhaul and restructuring of its fiscal functions and responsibilities. Existing fiscal standards needed an in-depth review and policy restructuring. The Sheriff’s Office promoted the right person for the job. The financial platform has been streamlined, along with the accounting and reporting process. The Office has implemented more effective controls, such as updating the check approval process and installing a more current system of checks and balances for better financial accountability.

At the start of this administration, the office had to determine how to utilize $40,000 worth of equipment that was not being used. Also, the IT department has been training employees on upgraded programs, tagging all new and existing equipment, and upgrading all security systems and protocols to improve performance.

Prior to Sheriff Bilal taking office, public information/public relations functions were handled by a variety of consultants. By hiring one Public Information Officer (PIO) and one Public Relations Firm, the office has reduced consulting costs dramatically while improving efficiency in communications. All internal and external communications are developed and distributed through these two communications channels.

The most significant change to Civil Enforcement this year was the addition of delivering Protection from Abuse (PFA) orders from the courts. Since the pandemic has shut down the courts, virtual hearings have been conducted. A copy of each order is automatically forwarded to the Civil Enforcement Unit. Officers assigned to this unit traveled throughout the city to serve these orders.

The Sheriff’s H.A.R.T. unit is part of the Real Estate department and is responsible for identifying and locating owners who are owed excess funds for properties sold at a Sheriff sale for more than the debt owed. As of today, the H.A.R.T. unit has disbursed $1.4 million to previous homeowners.

From day one, Sheriff Bilal prioritized providing up-to-date employee training especially for sworn officers. All employees, new and existing, received training on the City of Philadelphia Code of Ethics.

Sheriff Bilal recognized there were many budgeting issues within the advertising department, so she tasked external firm TML Communications to handle a full audit of the media advertisement budget spend and its fee structure. As a result, every media publication reduced their cost (per line/per page) and the consultant commission fee was eliminated. Making these significant changes will annually save the office an estimated $3 million-plus on average based on previous annual advertising costs.

Serving the needs of the community is a priority for Sheriff Bilal. As such, the Office has restructured relevant departments and implemented impactful activities.

Community outreach has become a cornerstone of the Bilal administration. This unit has targeted areas of high gun violence to offer free gun locks to those who need them. Since the start of the pandemic, the Sheriff’s outreach staff has distributed over 18,000 boxes of food to those in need throughout the City. Furthermore, serving the community at large is such a key part of her agenda that Sheriff Bilal hired a Community Outreach Director specifically to address community concerns. Additionally, the Constituent Services Department works directly with the public and has been a referral source for constituents who need assistance with various housing-related concerns. The Office hosted a Community Virtual Town Hall to keep the community informed during the pandemic. More than 1,500 viewers participated in this presentation that introduced the community to the new structure and services of the office.

As a law enforcement agency, most of the employees in the Sheriff’s Office are essential personnel.  As such, this Office must operate at full capacity even during the pandemic. Sheriff Bilal has prioritized the safety of all civilian employees and sworn officers, including by purchasing personal protection equipment for all staff. All office areas are serviced consistently by professional sanitizing companies. Lastly, employee rotation schedules were implemented to better enforce social distancing guidelines.

The pandemic, along with civil unrest, has increased the emergency response details around the city. During the unrest of last year, Sheriff’s Deputies secured all court buildings. Additionally, the City Commissioners’ Office requested the Sheriff’s Office provide security at voting locations and secure and transport completed ballots during the November 2020 election.

This unit, under the direction of the Sheriff, put in place state-of-the-art security procedures at our Armory. Also, safeguards were established to protect firearms that are stored at this facility. Computer-generated tracking systems were put in place to track PFA weapons and Philadelphia Sheriff’s Office -owned weapons. Destruction of PFA weapons has been coordinated with the Philadelphia Police Department (PPD) Evidence Unit and all procedures have been implemented consistent with PPD policy. Prior to Sheriff Bilal taking office, such in-house reviews of inventory status were not done. This process will continue on a consistent basis. This unit has had an aggressive training program. Some of their accomplishments are highlighted below:

•  95% firearms qualification completion: This is the highest completion rate ever in the same year. While final statistics were not available yet, projections indicate that the unit was able to achieve 100% by the end of 2020.

–The Sheriff instructed trainers to add Conflict Resolution Training to the curriculum – the first time such training has been included.

–Since Sheriff Bilal took office, 18 deputies have graduated from the Academy. All deputies have completed active Act-2-2014 mandated training.

After reviewing the office space, Sheriff Bilal has led an ongoing redesign effort to improve both working spaces and the areas that serve the public. This redesign will include updated fixtures, new furniture and better security systems when it is completed in 2021.

About the Office of The Sheriff of Philadelphia