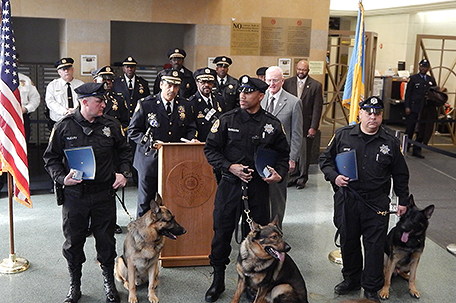 Thanks to an anonymous donor and a non-profit organization called Vested Interest in K-9s, Inc., the four-legged members of the sheriff’s K-9 Unit—Blair, Jimmy and Carter—will be receiving bullet and stab proof vests to help protect them from harm while on duty.

“This added protection will serve as a vital layer of safety for our K-9s,” said Philadelphia Sheriff Jewell Williams.  “These animals serve a vital function in protecting citizens and supporting law enforcement as a whole.”

The dogs have been specifically trained to sniff out bombs and narcotics, and are used in many different situations, including, and mostly, security for the courts in Philadelphia.

Their handlers are Sergeant William O’Leary and Deputy Sheriff Officers Andrew Ortiz and Barry Johnson.  The dogs were named after the grandchildren of Jimmy Binns, a Philadelphia attorney and philanthropist who donated the money for the training and purchase of the dogs.

Delivery of the vests is expected within eight to ten weeks.

Vested Interest in K-9s, Inc. is a 501c (3) charity located in East Taunton, Massachusetts whose mission is to provide bullet and stab protective vests and other assistance to dogs of law enforcement and related agencies throughout the United States. Since its inception in 2009, the organization has provided over 2,100 protective vests, in 50 states, through private and corporate donations, at a cost of over 1.9 million dollars. All vests are custom made in the USA by Armor Express in Central Lake, Michigan.