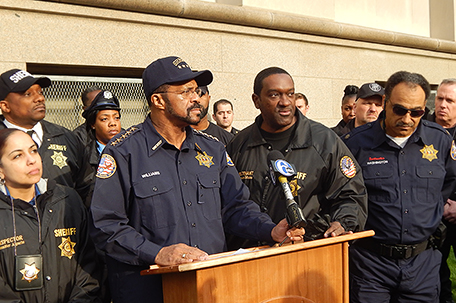 The Office of the Sheriff of Philadelphia City and County, in conjunction with Philadelphia Police, Pennsylvania State Police, and Sheriff Deputies from Chester, Bucks, Montgomery and Delaware Counties conducted an early-morning, citywide sweep for fugitives wanted on outstanding warrants across the region.

The raids began at 2 AM and took place in every section of the city.

The sweep netted 15 individuals, whose charges ranged from domestic abuse to attempted murder, robbery, and failure to pay child support.

Operation Sunrise marked the 17th year this multi-county task force led by the Office of the Sheriff of Philadelphia and its Fugitive Warrant Unit under the leadership of Lt. Vernon Muse.

The raids consisted of approximately 70 officers overall, as well as the Sheriff’s K-9 Unit of three dogs trained to sniff out drugs and bombs.

“It is a testimony to the cooperation and spirit of these officers to come together from so many jurisdiction and be on one accord,” said Philadelphia Sheriff Jewell Williams.

“These (wanted) individuals are charged with a mix of serious crimes committed both here and across the region”, added Sheriff Williams.  “While on the run they become involved in even more criminal activities to sustain themselves, including robbery, burglary, and drug trafficking.   Getting them off the street also helps to decrease the overall level of violence in the city”.

The raids ended with a press conference at Family Court at 1801 Vine Street where the prisoners were temporarily held before being transferred to the city or town that has a warrant for their arrest.

“We are sending a message to these individuals that we have not forgotten them and Operation Sunrise is just another way to shrink their comfort zone as much as possible,” said Sheriff Williams.