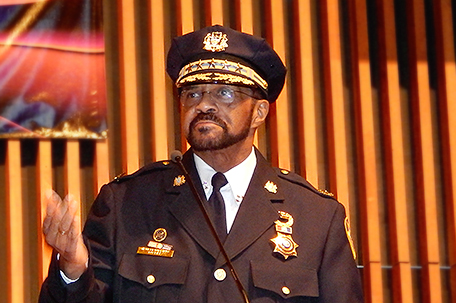 When I chose to run for the office of Sheriff of Philadelphia City and County, I was asked by several friends and colleagues why I would want to take on a position that was rife with problems ranging from corruption and inefficiency, to outdated filing systems done mostly by hand.

My reply was because I believe in the city, and I believe the office is a vital part of its growth and success and I know the good it’s done, and continues to do in spite of the investigations, charges and outright ignorance of the functions of this office.

Trying to turn the tide on a culture that has been 20 years in the making is no easy task by any stretch of the imagination, and expecting a complete makeover in just two years is both unrealistic and unreasonable.

Still, and despite the challenges and hurdles, we have never missed a Sheriff’s Sale, and have even expanded those duties with an extra day at the request of the City of Philadelphia.

Our Deputy Sheriff Officers have performed a stellar job in protecting the courts and transporting hundreds of prisoners a day between detention facilities and the courts with no escapes and mostly without incident.

This is all been possible mostly because of an overall dedicated staff that works hard to deliver services under stressful conditions, and still manage to be “polite and helpful” as attested to by many who do business with the office in person.

As the enforcement arm of the court, the Office of the Sheriff of Philadelphia City and County exists to both protect the integrity of the judicial system, and the rights of an individual whose home has been ordered sold because of tax liabilities to the city.

In the past two years this office has:

• Contracted to install a modern computer system for the first time in the history of the department.  The contract took approximately a year to fulfill to insure we were getting the best company possible for the job and to make it’s way through the bidding process.

• Trained staff on how to best access and utilize the system, and are currently inputting over 20 years worth of documents and receipts

• Returned over $4 million in excess proceeds owed to citizens of Philadelphia.

• Held dozens of seminars on how to buy property at a sheriff’s sale, and have sponsored approximately 15 major community workshops on how to stay out of foreclosure and keep your home.

• We have introduced electronic deed filing to reduce the time a purchaser has to wait for a deed. Where it once took 12 weeks or more to get a deed, it now takes four weeks or less.

• At the City’s request we have started an additional Tax Sale, which creates more revenue for the city.  Each year we sell over 7,500 properties on behalf of the City and lenders.   (Sheriff sales are a major source of revenue for the City).

• In addition to $2 million in writ fees paid to the City, through the sales we turn over to the City an average of $2.5 million monthly of delinquent taxes, water and gas bills for a total of close to $32 million that is provided to the city and its agencies each year.   The Office of the Sheriff of Philadelphia City and County is as complex and vital as any other in this vast metropolis.

To successfully continue to safeguard judges, witnesses, juries, and efficiently perform its other duties, we will continue to upgrade our training, technology, and staffing at every opportunity.

My goal, our goal, is to be the sort of sheriff’s department the citizens deserve, which is always nothing but the best.