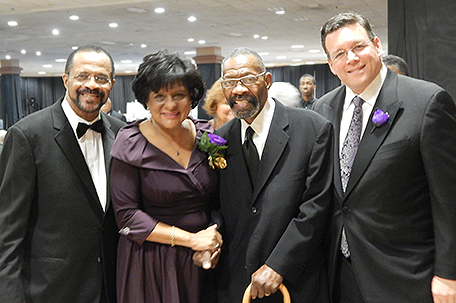 ABOVE PHOTO:  Sam Staten Sr. was honored by the Prince Hall Masons in 2014 with Councilwoman Blackwell, Jeff Brown of Brown’s Shoprite and Sheriff Jewell Williams.

Philadelphia lost an icon when Sam Staten Sr. passed away on Apr. 26.  His passing touched many in Philadelphia from the Mayor’s office, the membership of the Local 332 union to African-Americans whom he improved their quality of life.  Philadelphia Sheriff Jewell Williams remembers his friend and what he did for this city.

“He meant opportunity to folks who were looking for jobs. Opportunity for people who got a second chance,” said Williams referring to workers who chose a career in labor instead of college.

“People had to make a choice between going to college or take care of their family and seek labor work. He was able to get them labor work with dignity.”

“He was a man who believed in helping people and he wanted to help, asked how he can help,” he said of Staten Sr. who was the long-time Business Manager of Local 332 and retired in 2010.

Williams and Staten Sr., were also good friends and in the same Masonic order.

“He was a 32nd degree mason. I recommended him. When he was given the 32nd degree, he was very elated. The smile on his face, was so rewarding to see that.”

Staten’s advocacy was on-the-spot. Results you could see immediately in some cases.

Williams recalls a time when he reached out to Staten Sr. when he noticed a North Philadelphia construction project in progress that had no African-American workers.

“I recall 30 years or more ago, there was some development going at 20th & Susquehanna. There were men digging.  No African Americans.  Back in my activism day I called Sam Staten. He said, ‘I’ll be right down.’”

Sam kept his word, forcing the development company to hire 30 Black men on the spot.

Regarding the importance of union legacy and influence, Williams notes how Staten Sr. passed the baton.

“Because of Sam’s experience he has trained Sam Staten Jr. and Ryan Boyer.  He has trained and taught these guys and they take his experience for the betterment of the union,” said Williams.

Mayor Kenney issued a statement about the impact Sam had on the city.

“Sam Staten was nothing less than a giant in the world of Philadelphia labor for more than a half-century. “I counted Sam as a friend, and I will miss his wisdom and guidance.”