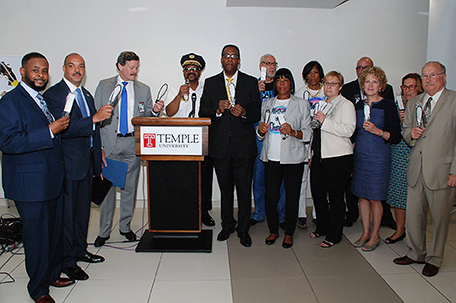 That was the prevailing message given by Sheriff Jewell Williams on August 1, 2016 at a press conference held at Temple University Hospital to announce the coming together of several entities pushing for the use of gun locks. It was stressed that how even a few seconds between pulling the trigger and thinking about it could possibly save a life.

The press conference was held at the Ontario East Lobby of the hospital, literally just yards from the emergency ward and trauma center where so many of the victims of gun violence are treated in Philadelphia.

“We transport more than 500 people per day back and forth between the courts and the prisons,” said Sheriff Williams. “Many are charged with crimes involving guns.  Before anger gets to a point of reaching for a gun, if that gun is in a lock, it provides at least a few seconds an individual may change their mind about firing that weapon, and makes it almost impossible to fire if found, and handled by a child. Got a gun—get a lock.”

“This hospital (Temple University), is ground zero for trauma patients,” said City Council President Clarke.  “It is the place where so many people come after being shot.” 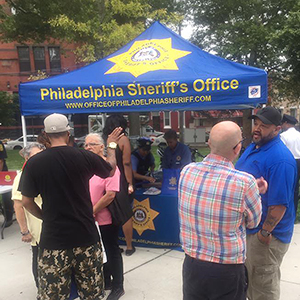 A bill was recently enacted by City Council entitled the “Responsibility to Avoid Possession and Discharge of Firearms by Children” act (introduced by Council President Clarke) that requires all firearms in homes with children under the age of 18 to be kept unloaded and stored in a locked container, with the ammunition in a separate locked container. The exception would be when the firearm or ammunition is in the “immediate control” of a person with a license to carry a gun.

Free gun locks were distraught on August 1st by the Office of the Sheriff of Philadelphia City & County as part of its National Night Out kickoff initiative. The giveaway took place at Fair Hill Square Park, 4th Street and Lehigh Avenue and at the Rose Playground, 75th and Lansdowne Avenue.

According to Philadelphia Sheriff Jewell Williams, there were also several hundred people who showed up for the second evening of the gun lock giveaway on Monday, August 2nd.Turnout was high at all three locations: 32nd and Cumberland, the Parkside Evans Playground in West Philadelphia and 2300 N.17th Street.

The giveaway was successful largely because “ all the people [in attendance] were fully engaged from the community and from law enforcement,” Sheriff Williams stated.

The events that began with the “National Night Out” kickoff will take place until the end of the year as part of an ongoing effort and partnership between law enforcement and the communities they protect.

Sheriff Williams hopes that the lasting impact of this year’s efforts will be to increase greater responsibility among Philadelphia’s gun owners.

“I’d like to see more people become involved with the gun lock program and with gun safety, especially concerning children and [the prevention of] accidental shootings.” he said.