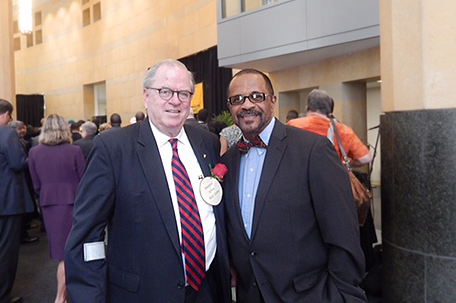 Lawyers, judges, and community leaders filled the lobby of the Justice Juanita Kidd Stout Center for Criminal Justice at 13th and Filbert Street recently for the building’s official re-dedication ceremony on Thursday.

It was an effort that began in 1998 by the Philadelphia Bar Association. The goal: to rename the Criminal Justice Center after renowned Judge Juanita Kidd Stout. Twelve years later, City Council unanimously voted to approve the change to commemorate Stout, who was the first black woman elected to a U.S. court and the first to sit on a state Supreme Court.

“Not bad for a girl from a small town in Oklahoma,” said Pennsylvania Supreme Court Chief Judge Ronald Castille.  “She was conscientious, she was hard working, she was diligent and she was never afraid to take on the toughest criminal cases that we had in the system. She was that good.”

Sheriff Jewell Williams called her a “person of extreme integrity and who was always on point with the deputy sheriff officers charged with protecting her coutroom.  She was a joy to work with”.