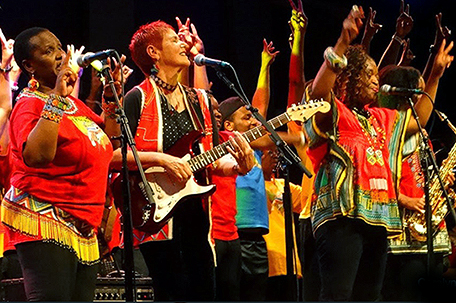 The Grammy-award winning group will perform as part of a screening of the group’s  2015 documentary, “When Voices Meet”.  This versatile group of musicians, singers, dancers, and workshop leaders bring pulsating rhythms, rich harmonies, guitar-driven melodies and Zulu dances, along with compelling lyrics to tell South Africa’s story, past and present. The group takes the audience on a joyride through South Africa’s past.

The Peace Train began in 1993 when Sharon Katz formed a 500-voice multiracial choir, which crisscrossed the country for seven years. From a nation torn apart by apartheid, these children of many races sang their way into the hearts and souls of the people of South Africa to heal a nation. The Peace Train performed numerous times for President Nelson Mandela, playing a concert for 90,000 people in a South African stadium prior to his election as president.

“When Voices Meet,” documents the trials, tribulations, and triumphs of those musician activists and young choir members. After having performed together for seven years, they reunited 20 years later to tell their stories and reflect upon The Peace Train’s impact. A joyful, inspiring story of hope and determination despite tremendous obstacles, the film includes lessons that apply to American issues today.

The Peace Train has numerous recordings and has recorded with Pete Seeger, Sting, Elton John, Tina Turner, Madonna, Paul Simon, and Luciano Pavarotti. Sharon Katz is a composer, recording artist, and peace activist who grew up in South Africa performing countless concerts. Between trips to South Africa, she resides in the northwest section of Philadelphia.

The First United Methodist Church of Germantown has a long history of support for South Africa, and in 1994 sent a delegation of 14 members to serve as official observers of the first free election in South Africa’s history.

Admission to the film and concert is $20.

The Peace Train uses proceeds from their appearances for their humanitarian work in underdeveloped areas of South Africa, including feeding programs in impoverished areas, conflict resolution work in violence torn reasons, and building schools and community art centers.