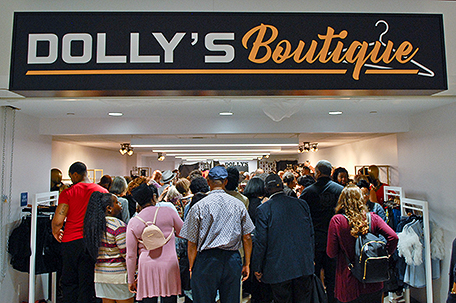 ABOVE PHOTO: Throngs of shoppers excitedly make their way through the doors of Dolly’s Boutique at the Grand Opening.  (Photos: Bill Z. Foster)

In the midst of celebrating the boutique’s 10th anniversary, and with plans of expansion on the horizon, Dolly’s was presented with a wonderful opportunity for a new location in the Fashion District Philadelphia mall. Newton spoke to The SUN about her journey as an entrepreneur and her excitement for the growth of Dolly’s Boutique.

Newton’s dream of becoming a business owner began at just 12 years old. She was inspired by the work ethic of Dorothy Allen and Leroy Kelly, who owned the Burger King where she had her first job at 15. Newton went on to become the youngest supervisor of that Burger King at just 16 years old.

She then opened her first business — Gentle Touch Car Salon in 1998 — the first full-service auto detail shop owned and operated by a woman in Philadelphia. In 2000, Newton created Shoppe Shani Inc., an accessory and jewelry business.

Although entrepreneurship came with its fair share of ups and downs, Newton stayed the course. In 2009, Dolly’s Boutique came to fruition.

“I know sometimes people are frustrated when things don’t happen fast for them, and I just want to use my story as an example,” she said. “I’m 44 years old, and it just seems like things are starting to happen for me now. Things didn’t happen fast for me. I sold out of the trunk of my car for 10 years. I sold in salons, in houses, in my house… and it was 10 years before I opened my first storefront.  So, I’m celebrating 20 years in business, but only 10 years in my store front, and those 10 years [have] had many ups and downs and have not been easy. So even if people have been at it for a few years and they haven’t seen the kind of progress they would like, it’s not a failure — it takes time. I didn’t give up and I didn’t let anything deter me from where I was trying to go. Faith in myself and in a higher being definitely played a role as well.”

Patience and dedication paid off when hard work met the right opportunity. Formally known as The Gallery, the grand opening of Fashion District Philadelphia took place on Thursday, September 19.  As the only downtown mall in Center City Philadelphia, Dolly’s Boutique’s new location there is a big deal.

“Dolly’s Boutique will be opening up our second location inside of the new Fashion District of Philadelphia,” she said. “It’s been a long process. We were selected out of over 80 small businesses in the Philadelphia area that expressed interest in a space in the Fashion District. It happened through initiatives from the city and the commerce department, who demanded that minorities and small businesses be included in that process.”

“The Enterprise Center took the initiative to screen small businesses to see who they thought would be a good fit for this project,” Newton continued. “Out of 80 small businesses, 12 were selected and sent to Fashion District management. Finally, four were picked out of the 12.

The section where Dolly’s Boutique is located is called “Uniquely Philly” in honor of the four businesses from Philadelphia located within the mall. Newton plans on maintaining the same quality of clothing and accessories shoppers have come to expect from Dolly’s.

“Dolly’s is not only a place where you come when you want to have show-stopping pieces or when you’re going somewhere special; we also have a flair for everyday looks and we have things that you can wear to the office,” she said. “We’re going to carry more casual lines, things you can wear every day, lots of accessories and one of a kind pieces that you can only get exclusively at Dolly’s Boutique. You’ll find new lines that we’ll be carrying, but you’ll also see the same classy, fabulous fashions that we carry at our Mt. Airy location.”

Paying homage to her humble beginnings, Newton spoke about her desire to offer similar opportunities for other local businesses.

“We’re looking to support other local brands in addition to the stock and quality of clothes Dolly’s is known for carrying,” she said. “There were over 80 businesses and designers that wanted to be in the Fashion District, so this may be a way for us to support them by featuring some of their brands in our boutique. We’ll also be carrying some skin care lines from local entrepreneurs. So many people have helped us over the years to get to where we are and we want to be in a position to help others as well.”

The ribbon cutting and grand opening of Dolly’s Boutique took place at noon last Thursday, shortly after the Fashion District Philadelphia mall officially opened its doors. Newton was surrounded by family, friends, church members and community members as she prepared to cut the ribbon to her store. There was a short ceremony before the ribbon cutting, where people special to Newton said prayers and spoke life over her newest business venture.

After a performance from a small choir, Shani Newton opened her doors to a large crowd anxiously waiting to enter. There were so many people in attendance that some people had to be held back until the first to enter exited. In addition to a great turn out for the grand opening, Newton had a star-studded series of events planned including a visit from Tracey Bregman, the actress who has played Lauren Fenmore on the longtime CBS soap opera “The Young And The Restless” for many years.

Newton met Bregman seven years ago by chance in an elevator in New York. They hit it off and have been friends ever since. Bregman’s participation in the opening of Dolly’s Boutique brought Newton back to a full circle moment that centered around the inspiration she found for Dolly’s Boutique while watching “The Young and The Restless” with her grandmom, Dolly.

“The thing about it is, I used to watch “The Young and The Restless” with my grandmother,” she said. “My store is named after my grandmother Dolly. On “The Young and The Restless”, Tracey plays Lauren Fenmore who owns Fenmore Boutique. Fenmore was my store in my head as a kid. She wasn’t able to come to the store for the grand opening with her taping schedule, so we set this event up for Monday.”

A portion of sales from Grand Opening Weekend also went to charities helping those impacted when Hurricane Dorian tore through the Bahamas last month.

Dolly’s Boutique is also starting their own line of clothing and accessories, where Tracey Bregman will be one of the faces helping to promote it.  The new location of Dolly’s Boutique in the Fashion District Philadelphia mall is on Concourse level, unit 162, right outside of Century 21. Store hours are from 10am-8pm Monday through Saturday, and Sunday from 11am-6pm. Be sure to follow Dolly’s Boutique on Instagram @dollysboutique and visit their website at: https://www.dollys-boutique.com for additional details.