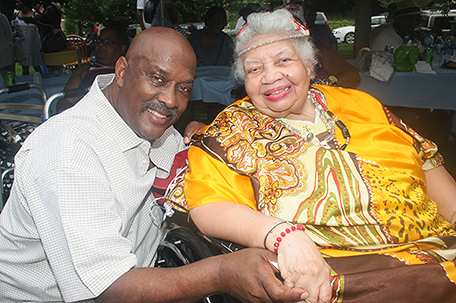 The Friends of the Dave Richardson Celebration Committee and the Greater Germantown Youth Corps were the official hosts of  a day-long community barbecue held to honor the late State Representative’s legacy.

The neighborhood event, which was held last Saturday, was in Awbury Park on East Haines Street.

On hand during the day’s festivities was Elaine Richardson, the mother of the state lawmaker. Among the elected officials at the event were Congressman Dwight Evans and City Councilwoman Cindy Bass.

When he was elected at the age of 25, David Richardson was the youngest member of the Pennsylvania House of Representatives, serving on the Health and Human Services and House Urban Affairs committees.

A Germantown High School graduate, Richardson was known as an advocate for the poor and working class. He played a pivotal role in the Pennsylvania Department of Welfare’s repeal of the property lien statute on the homes of those who collected public assistance. His legislative agenda also included prison reform, equal rights, and other social justice issues.

Unanimously re-elected for 12 consecutive terms, Richardson served as chairman of the Pennsylvania Legislative Black Caucus and the National Black Caucus of State Legislatures. Additionally, he was chairman of the Philadelphia Black Elected Officials and was a 59th Democratic ward leader. He died of a heart attack while in office at the age of 47.

Members of the original East Germantown Community Cookout —an annual event that began in 1975 and continued for about 20 years — who hosted the first event were also present. Among them were Terry and Betty Higgins as well as Derek and Mona English. Both couples live on the 5500 block of Devon Street where the Richardson family resided for many years.

“Hopefully this event will bring things back to the way they used to be,” said Mona English. “We were a tight knit community. This was a tradition to come out together in the park. All the representatives would come out. So, I think it’s good to bring this back”.

Gary White of East Falls said that he used to come the original Awbury events. He pointed out that many who were present were from the Germantown for Better Fathers group, an offshoot from Sommerville for Better Fathers. He said that David Richardson started the fathers’ group about 40 years ago. Part of the premise of having the annual Awbury picnic was to give fathers the opportunity to create memories with their children, particularly if they were not present in the home.

“This park used to be packed,” White said. “You could learn about jobs in the community, get information on veteran’s services, or find out about different programs. There used to be many vendors, including different organizations like PGW, telling you how to keep your gas on or the programs they offered to help with your bills.”

“Of course, we had the live entertainment and the food,” White continued. “It was just always a nice time for the community to get together. Dave Richardson thought this could be a family event and when it started, each family donated $5 and you could eat as much food as you want. Everyone pitched in.”

Among those honored at the event was 84-year-old Grace Smith. She said that being at the event brought back memories of when she was among those advocating for the rights of local community members, including African-American lawmakers who were always accessible to the community and about how much that type of interaction is needed today.

“I hope they [current leaders] become more like David P. Richardson, Jr.,” Smith said. “He was devoted to the community. If he was at this event today he would be walking around and talking to each and every person here. He was never aloof. Everyone felt free to go up to him and air their concerns. I think the leaders coming up can learn from his example”.