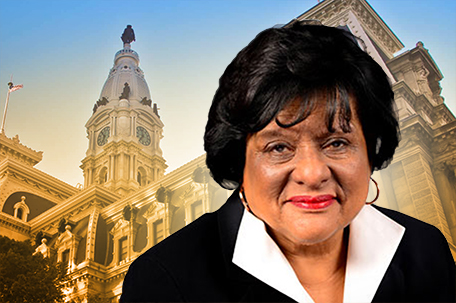 As she leaves Philadelphia City Council, Jannie Blackwell reflects on 47 years of working for the people and what’s next.

Cleaning out three offices and more than 40 years of supplies, papers and memories requires a lot of hands.

On the Friday before New Year’s Day, Jannie Blackwell and the members of her Third District City Council staff are busily boxing things up, putting things away, fixing chairs and otherwise preparing what was once the Councilwoman’s office for Kendra Brooks, the independent Councilwoman At-Large that will be taking over two of the three offices Blackwell’s used since her late husband, Lucien Blackwell, brought her to City Hall to be his chief of staff.

But while her staff is packing her up, Blackwell is still serving Third District constituents. As she walked down the hall to go into another one of her offices, she spots a constituent, a man she’s worked with frequently. She stops to talk with the man, and gives him the assistance he needs.

“He comes to me all the time,” she said. “He’s one of the people I’ve helped a lot. I worry about these people. I don’t know what’s going to happen to them.”

Since January 1976, when she entered City Hall as her late husband Lucien’s chief of staff, Jannie Blackwell has been working on behalf of the Third District, which includes the bulk of West Philadelphia.

She lost her bid for re-election in the April primary to Jamie Gauthier, who was sworn in as the new Councilperson on Monday.

Because Blackwell’s seat was considered one of the safest in City Council, the loss came as a surprise to a lot of people. But she admits that the perception of safety may have contributed to that loss. That, and the support her opponent got from Philly 3.0, a group that she says “wants to take over our city.”

“I don’t think I ran a good campaign; an effective campaign,” Blackwell said. “A lot of people didn’t know. They just assumed “she’s okay, because she hasn’t been in touch with us. She hasn’t done those things that people do in this day and time. I think we didn’t do what we should have done. I think it’s my fault. I don’t think it’s the community’s fault.”

While she had always wanted a career in public service, running for Council wasn’t something that Jannie Blackwell considered initially.

When Lucien Blackwell left City Council to mount a successful run for Congress in 1991, Jannie initially thought she’d go to Washington to help him run his office.

But his concern about the people of the Third District and the people working in their office led to her making other plans, she said.

“I talked about going with him, but he said, ‘What about all of the people and their families; the people that work for us, the people we serve,” she said. “‘We need you here.’ So I tried to follow his agenda. I tried to make sure that government responds to the needs of all, not just of those who have.”

Toward that end, the Blackwells focused their work on such issues as making the building trades more diverse, making sure all development included jobs for people in neighborhoods and uplifting everyday people whenever possible, Jannie Blackwell said.

Much of Blackwell’s work has focused on homelessness and how to help those who have no place to call their own.

Two yearly events, a Christmas party held at the Pennsylvania Convention Center that attracts nearly 8,000 people and a cookout that has traditionally been held in the City Hall courtyard, brought those in need together for good food, gifts and a good time.

It’s also a chance for people to see everyone’s humanity.

“What we’ve tried to do over the years is to invite everyone from judges to people who sleep on pavements,” she said. “We try to display the fact that we’re all human beings. God made us all. Some people might be up and some may be down, but we’re all brothers and sisters and we have to try and share what we have and help one another. We serve God by serving others.”

Since losing the primary, Blackwell has been honored by a host of organizations. At a tribute held at the University City Sciences Center, community members came out to thank her for her service.

One of those community members was Tracy L. Fisher.

When he was about to leave prison, Fisher read an article about all of the members of City Council and decided to reach out to them by sending the same letter to all of them at the same time.

Blackwell was the only person who wrote back.

“In jail, when you get mail, that’s a good thing,” Fisher said. “I didn’t think that any of them were going to write back, so I didn’t expect a letter. The letter said ‘Congratulations on your release. Come and see me when you come home. We sat there, ate Christmas cookies and drank water, and we spoke about what I wanted to do in the community.”

Blackwell told Fisher about Southwest District Services, and helped him connect with them, but she didn’t stop there. She kept an eye on him, Fisher said, and was ready to help him with his first community event.

“She’s the reason I’m successful, and I don’t say that too much, other than to my mother,” Fisher said. “When I decided to do an event…it was my first event ever and it was called ‘Let Go, So You Can Hold On’…It was an all-woman event and I was renting out Pepper Middle School. I didn’t have any money, but I had an idea.”

“Councilwoman Blackwell took out her personal checkbook,” Fisher continued. “She didn’t do no activity grant. She didn’t go through government or none of that. Wrote me a check. And because of that check, I’m standing here successful.”

While she’ll be leaving Council, Blackwell won’t be going completely away. She is the chair of the Black Ward Leaders Council, an officer in the Democratic City Committee, and she also intends to keep working on housing for all. She’ll also continue to be active with a group she created, the Mayor’s Commission on African and Caribbean Affairs.

What’s next professionally is anyone’s guess. Blackwell says that if Gauthier has any questions as she moves through her new position, she’s available if she can be helpful.

But now that she’s stopped working, she can think about it, at least.

“I haven’t had time to stop and think,” she said. “But, who knows what the future holds?”