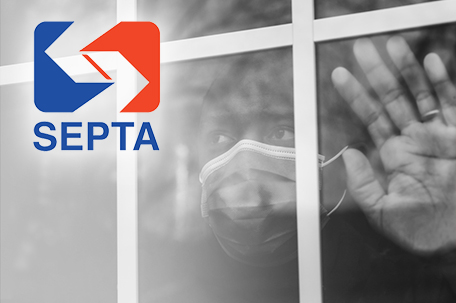 PHILADELPHIA  — In late March, as leaders for Philadelphia’s regional mass transit authority prepared to unroll restrictions on boarding buses, requirements for cleaning and rider mask mandates to stem the spread of the coronavirus, Anthony Bowman struggled to get comfortable amid a fever and shortness of breath unlike anything he had ever experienced.

It took nearly a month for the 59-year-old station attendant to feel well enough to return to work. It wouldn’t be his last brush with the coronavirus as a frontline worker, but it would be his last fully paid leave to deal with possible exposure to the virus.

Bowman and the other nearly 5,000 Southeastern Pennsylvania Transportation Authority workers represented by the Transport Workers Union Local 234 called the agency’s policy that caps paid leave to quarantine at four weeks “Scrooge-like.” And as coronavirus cases in Philadelphia top 88,000 during a second wave of infections and more than 2,300 deaths have been confirmed, union leaders say the policy is a disincentive for workers to report when they’ve been exposed to the virus or to get tested when they don’t have symptoms.

Andrew Busch, a spokesperson for SEPTA, said the policy allows 160 hours of paid quarantine leave, meaning an employee could quarantine for two 14-day periods if they were exposed or tested positive. After that, the policy requires employees to use sick leave, which pays 50% of their normal salary.

Busch said about 100 of the total 9,300 SEPTA employees had used all of the allotted fully paid leave. The agency reported more than 840 workers had tested positive as of this week, with about 460 returning to work. Nine employees have died from complications of the virus.

But union officials said workers who know there’s a limit are hesitating to get tested or to quarantine, and could be keeping it to themselves and reporting to work like normal.

“This is foolhardy,” union president Willie Brown said in an emailed statement. “We want everyone who is a possible risk to riders and coworkers to stay away.”

Union officials claimed in the statement that SEPTA leaders had denied a request to discuss the policy, adding that legal action is being considered. Brown acknowledged that ridership is down nearly 80%, but said the essential workers still taking buses and trains to work as health care providers and to staff grocery stores deserve protection, as do SEPTA workers, the majority of whom are people of color.

SEPTA officials have said the system is losing nearly $1 million a day as the city encouraged workers to stay home when they can, reducing ridership. The agency is considering fair hikes, service cuts and even layoffs to deal with the losses.

Paid leave policies differ at large transportation authorities across the country. Some like New York City’s Metropolitan Transportation Authority have a lower cap on the front end for paid quarantine leave, but allow for more flexibility depending on the individual situation to grant additional paid leave time.

Since returning to work at the end of April, Bowman has reported for his shifts cleaning trains and clearing passengers and sometimes homeless riders sleeping so the trains can be sent to the SEPTA train yard. He comes in contact with bodily fluids, food wrappers and used masks. Sometimes, there are enough gloves and masks for the job, but he and others at SEPTA have taken to bringing their own personal protective equipment as a backstop.

In early November, as a second wave of the coronavirus started to take hold in Philadelphia, a coworker texted Bowman to say they had tested positive for the virus. The two had been in close contact, so Bowman scheduled a test and called his supervisors.

He got tested on a Friday, received a negative result Tuesday and returned to work a week later after following his doctor’s instructions to quarantine for seven more days because he could still be a carrier of the virus. But when he got back, SEPTA told him the days would have to be taken as sick leave.

“Outside of this year, I haven’t taken an unscheduled sick day off in over 25 years; that’s what makes me mad,” Bowman said. “A lot of people don’t have 400 sick days saved up, and they’re having to think about what to do. A lot of us who work for SEPTA are not getting tested because of that reason. It’s a disincentive rather than an incentive.”

As Bowman pushes to get paid for the time he was on leave in November, he said the fight has become even more personal after his father died Friday of complications from COVID-19. His father had fallen and felt short of breath, but Bowman never thought he would be diagnosed with the coronavirus at the emergency room or that he would die less than a week at the hospital.

“When I say I quarantined. I didn’t see anyone. I was by myself. I told my sons not to come check on me. Most of my contact with my father has been over the phone with him or his wife,” Bowman said. “But there are people who can’t be that isolated, and they’re going home to chance exposing their families.”