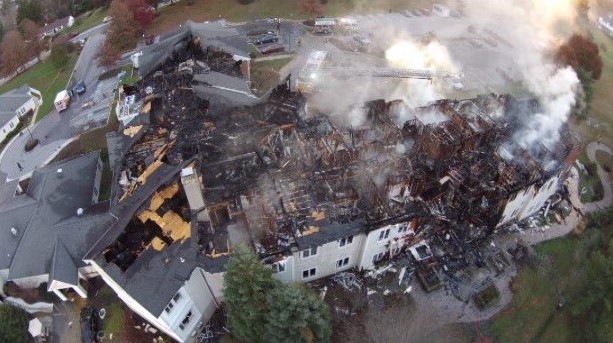 Authorities struggled on Friday to account for the whereabouts of all the residents of a Pennsylvania senior living community after a massive blaze tore through their complex during the middle of the night, injuring nearly 30 and leading to a chaotic evacuation.

West Chester Mayor Jordan Norley said Friday afternoon that a few of the more than 130 residents of the Barclay Friends Senior Living Community, located west of Philadelphia, were unaccounted for following the huge fire.

“We’re hoping for the best obviously here,” said Norley, who put the number taken to area hospitals at 29.

Officials said fewer than 20 remained hospitalized and all were in good condition.

County emergency officials said there was the possibility someone could have died in the fire, which erupted late Thursday night. But a spokeswoman for the federal Bureau of Alcohol, Tobacco, Firearms and Explosives, which was on the scene, told an afternoon news conference that no relatives had reported any family members missing.

Dozens of neighbors rushed to help with the rescue, wrapping the elderly in blankets and carrying some of them to ambulances in makeshift gurneys. Some of the residents were taken to a shelter set up at a nearby college.

Emergency management officials said much of the burned-out complex was too unstable for investigators to enter and check to make sure everyone got out.

Barclay Friends offers various levels of care including memory care, skilled nursing and post-acute rehab. The cause of the fire there was under investigation.

Larry Kingsland said he and scores of neighbors ferried elderly residents to medics as firefighters rescued them from the inferno.

“Everyone saw how devastating the fire was, and we all had the same reaction: that people needed help,” he said. “The whole neighborhood was helping.”

The fire spread to multiple buildings, engulfing sections within minutes as more than 400 emergency personnel responded. The heat was so intense that one firefighter battling the blaze discovered his helmet was melting, said county emergency services director Robert Kagel.

A spokeswoman for the senior center said about 132 residents were present when the blaze broke out. Emergency officials put the number of staff at about 20; they were all accounted for.

Patients at Paoli Hospital were admitted with issues related to smoke inhalation. A county official said some of the hospitalized residents complained of chest pains.

Many of the residents were pushed in wheelchairs or rolled on beds to safety, said Dina Ciccarone, another neighbor who helped move people away from the fire and to safety. In some cases, she said, people used blankets as makeshift gurneys to assist in the rescue effort.

“Most of them could not walk,” Ciccarone said. “Some were lying on the ground. We were just bundling them up.”

As the complex went up in flames, news helicopter coverage showed dozens of residents on the lawn or along the street, wrapped in blankets as overnight temperatures dipped into the low 40s. Some of the residents were taken from the scene by school bus.

Mike Lentz, an accountant who lives across the street from the facility, said neighbors helped to comfort seniors as they were led away from the flames.

“I would try to wrap them in a blanket and kept telling them, ‘You’re safe now,’” he said. “Some were crying. Some were disoriented and crying.”