Senator Tartaglione issues statement on the passing of her mother, Margaret Tartaglione 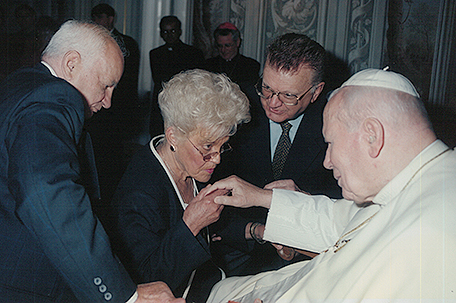 ABOVE PHOTO: This photo was taken when Margaret and her husband Eugene received an audience with Pope John Paul II during the couple’s 50th wedding anniversary celebration in Italy. (AP Photo/Sunday Alamba)

State Sen. Christine M. Tartaglione on Monday released the following statement regarding the passing of Margaret Tartaglione – the senator’s mother, leader of Philadelphia’s 62nd Democratic Ward and the former chairwoman of the City Commissioners:

“It is with immeasurable sadness and despair that I announce the passing of my beloved mother, Margaret Tartaglione. Throughout her recent illness, she was surrounded by family and friends, and was provided with the very best medical care. Thank you all for bringing her joy and comfort. My mother was a very strong yet compassionate woman. She cared deeply about her family, her community, and her city. She was a pioneer in the political realm – the first woman elected to a citywide office in Philadelphia’s history. At a time when women were rarely afforded a seat at the table, she not only earned a seat, she became an enduring leader and icon who will always be revered and remembered fondly.”

“The first thing that is memorable about Marge is that she not only demanded a seat at the table in Philadelphia politics, she retained it with a presence that was trailblazing. Today, we’re seeing more women doing that on the national stage but when Marge started, it certainly wasn’t the norm. In the rough and tumble world that was Philadelphia politics, even people who disagreed with Marge came to respect and admire her dedication.

“Marge also always made time to listen to the average person. If you went in her office with a question or a concern, she made time for you. You might have to listen to one of her political stories first, but she would listen to you! Marge Tartaglione was, in many ways, a reflection of how Philadelphians like to see themselves: tough, strong, and completely committed to their communities. That’s who she was.

I send my condolences and prayers to her daughter, Sen. Tina Tartaglione and all the members of her family.”