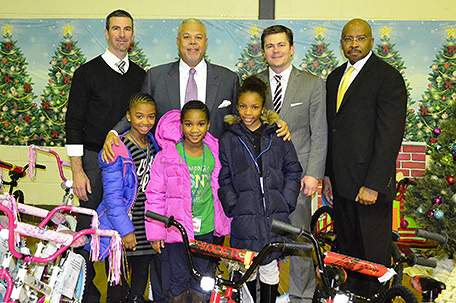 “Whether it was the Ben & Jerry’s ice cream, the new bicycles or the great entertainment, the people who attended the holiday party had a fun time together,” Williams said following the celebration.

“Fellowship is as important as what anyone can buy for someone, especially this time of year. The ability to be present in someone else’s life will last more than some gifts,” he said. “Suffice it to say we had an abundance of goodwill and companionship at this year’s party.

“My sincere thanks to the Boys Latin Ensemble and a long list of great businesses who added their special talents, time and gifts to make this holiday party better and better,” the senator said.

State Rep. Jordan Harris said the senator’s party is worthy of a big “Thank you!”

“I am glad to be a part of the party because this is what the holidays are about,” Rep. Harris said. “Once again, Sen. Williams helps to provide a happy holiday to many children who might have not had one.”

“We were proud to partner with Sen. Williams for his annual holiday event at KIPP Charter School/Motivation High School,” said Chris Thomas, CH2M HILL’s vice president of government affairs. “Each holiday season, CH2M HILL works with Philadelphia-area leaders to donate bicycles to the most deserving children in the community. Now in its second decade, the ‘Bikes for Kids’ program has donated more than 3,000 bikes in the greater Philadelphia area.”

“Special thanks to Eastwick Recreation Director Deborah Landers for the holiday display that surrounded Santa and Mrs. Claus for the photos,” Williams said. “And a huge thanks to the many volunteers from Wells Fargo, the Chester alumnae chapter of the Delta Sigma Theta, and students from Freire Charter School and Motivation High School.”