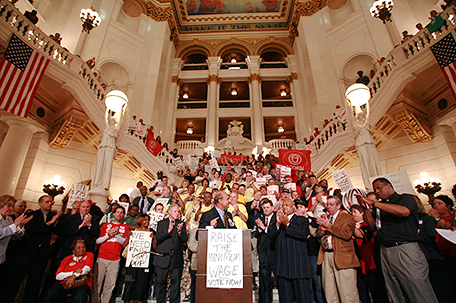 ABOVE PHOTO:  Pennsylvania AFL-CIO President William George rallies supporters of a minimum wage increase during a demonstration at the Capitol Rotunda in Harrisburg, in 2006.  At this time, George urged the Senate to allow a vote on raising the minimum wage to $7.15.  But today in 2014 at $7.25, workers are still suffering and drowning in bills.  (AP Photo/Daniel Shanken)

HARRISBURG – State Sen. Christine M. Tartaglione said this week she will replace her proposal to increase Pennsylvania’s minimum wage to $9 an hour with a new bill that would increase it to $10.10 by 2016.

Minimum wage increases under Senate Bill 1300 would be tied to inflation once the base hourly rate hits $10.10.

“A rising tide lifts all boats,” Sen. Tartaglione said during a rally to increase the minimum wage with “Raise the Wage PA.” “Pennsylvania’s hardworking women and men must have a fairer shake when it comes to paydays. They are drowning today with the paltry $7.25 they make each hour.

“To the critics who say an increase in the minimum wage will hurt the economy: you are wrong. Studies and history show that increases in the minimum have very little to no negative impact on the economy,” she said.

Citing a University of California-Berkeley study released last week, Sen. Tartaglione said the evidence in that review shows increases in the base hourly rate might mean small rises in the prices of products but it also sparks higher worker productivity and a more positive impact on businesses.

While other state lawmakers have proposed bills to provide a higher minimum, Tartaglione said she believes an incremental increase to $10.10 an hour is the more reasonable compromise. However, the senator’s new proposal would allow municipalities that have a higher cost-of-living to consider a higher minimum wage.

“We must act now to make sure people who are working 60-to-80-hour weeks and crazy hours are still not stuck in poverty once they are paid,” Tartaglione said. “And, once this becomes law, we must make sure minimum wage workers are covered if inflation affects their buying power.”

“Increasing the minimum wage benefits everyone,” she said.

In addition to the higher minimum wage, Tartaglione said SB 1300 would increase the fines and penalties for companies that violate the new law, once adopted. It would also provide for increased enforcement of the state’s minimum wage act.