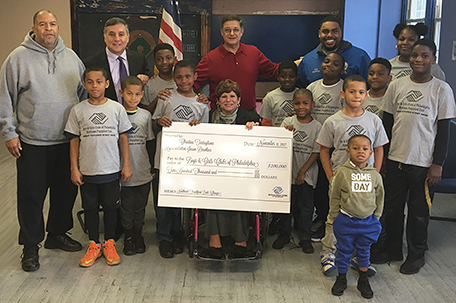 The funding will allow the club to complete major renovations to its century-old stone building, including the creation of a new recreation room.

State Sen. Christine M. Tartaglione and State Rep. Jason Dawkins presented a $200,000 grant to the Northeast Frankford Boys & Girls Club on Nov. 22 that will enable the club to complete major renovations to its century-old building on Kinsey Street.

The two-story stone landmark was built as a school shortly after the turn of the 20th century. Boys and Girls Clubs of Philadelphia acquired the property in 1938 and has been serving Frankford youths there ever since. Tartaglione and Dawkins secured the $200,000 Greenways, Trails and Recreation Grant from Pennsylvania’s Commonwealth Financing Authority – an independent agency of the Department of Community and Economic Development – earlier this month.

“We’re very pleased to be able to come here today with check in hand,” Tartaglione said to an assembly of club officials, benefactors and youth members. “This Boys & Girls Club has been around forever. It’s our responsibility to make sure kids have a future and have a place to go. I’m really excited this is happening. Everything is getting nicer and nicer.”

Dawkins echoed the senator’s sentiments and reflected on the vital influence the Frankford club had on his own life when he was young. Dawkins grew up mere blocks from the club and still lives nearby.

“I was raised in this Boys & Girls Club. I do not think I would be here in this capacity today if not for this club,” Dawkins said. “When we talk about igniting possibilities in young people, this club ignited something in me. This is what kept me out of the streets, kept me alive and kept me on the right path. I had very good mentors who were very stern and stayed on top of me for very good reasons. I am so pleased that we can do something real and give back.”

The $200,000 grant will enable the club to complete renovations to the first floor including the creation of a new social recreation room and grand gallery. In the past two years, the club has also created a new literacy center, renovated its gymnasium and transformed its dilapidated basement into a teen center, art studio, learning lounge and tech lounge. Further, the club has created a STEM lab, kids café and tech center. The forthcoming work on the first floor will finalize the much-needed renovations to the building.

“What we’re going to be able to do, as you’ve seen with the upstairs, we going to bring it back to its luster,” said Joseph Marziello, chief executive officer of Boys & Girls Clubs of Philadelphia. So many different folks have helped us with this. We’ve done it a room at a time and it’s been very stressful. When we got the call (about the $200,000 grant), it was pretty exciting. So thank you.”

Boys & Girls Clubs of Philadelphia serves youths in 22 units throughout the city. The Northeast Frankford unit has about 150 members and will be able to grow to more than 400 members with the facility improvements. The club is vital to a neighborhood where 65 percent of young people live in poverty. Its programs support their long-term academic, social and personal achievement.

“The support of Senator Tartaglione and Representative Dawkins was critical in making this project a reality,” Marziello said. “They are truly champions for our kids and have worked alongside us as we’ve fought to give youth in Frankford and across the city access to the resources they need to succeed.