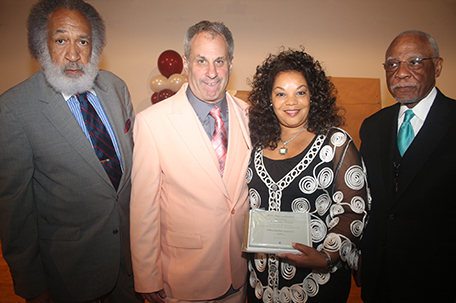 The Second Annual Legacy Awards honors some of the best and brightest of Philadelphia’s long list of special people. This year featured legendary Temple University basketball coach John Chaney (as straight-forward and honest as ever), the esteemed educator Dr. Ruth Wright Hayre, Dr. Walter P. Lomax, Jr., and Dr. David Shulkin. [See All Around Philly on page 18 for more photos from the event]

Catherine Hicks, publisher of the Philadelphia SUN, was also honored along with several others with the “Carrying the Torch Award” for her continued work with the SUN. The popular paper was founded by her late fiancée, journalism and civil rights legend, J. Whyatt Mondesire.

Held at the Seaport Museum on Columbus Boulevard, the event was both festive and somber as the honorees and their representatives were presented with the commissioned portraits of them painted by artists Cal Massey (Coach Chaney), Latiesha Carter (Dr. Hayre) and Beate Gibson (Dr. Shulkin).

Accepting for Dr. Hayre was her daughter, Sylvia, in a wheelchair but looking nonetheless proud and vibrant. She later went on to sign autographs of her mother’s book “Tell Them We Are Rising” that was handed out free to the close to 300 attendees by the Wright Hayre Foundation.

Former Philadelphia Mayor W. Wilson Goode, Miller Parker, president of the Business and Technology Center, and Stephen C. Satell, executive director of Philadelphia Legacies, shared the podium as the awards were handed out and the portraits unveiled.

Accepting for Dr. Lomax was his wife, Beverly, and daughter M. Claire Lomax, CEO of the Lomax Foundation.

Dr. Lomax, a well-known figure in Philadelphia for decades, was also an astute businessman and philanthropist. His legacy continues publicly through his foundation and radio station WURD, one of the few outlets that speaks directly to the conditions of African-Americans in Philadelphia and across the country. 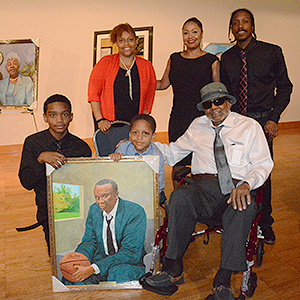 The ceremonies opened with a video-taped message from former Philadelphia mayor and Pennsylvania governor Ed Rendell, who referred to Chaney as a “ferocious lion.”  Chaney went on to live up to that legend as he humbly accepted his honor, then went on to give his Chaney-style opinion of the 45th President of the United States.

“I’m angry for us,” declared Chaney.  “We voted for that …hole.  I hope they (future generations) will not see what I’m looking at today.”

In a gentler tone, Chaney, 85, who came to the podium in a wheelchair but stood on his own at the microphone, thanked his family and his two great grandsons who were also at the ceremony.

Referring to his family and friends in attendance, Chaney reminded the attendees “if you keep good company, it helps you be a good person.”

Other recipients of the “Carry The Torch” Award included: