The Sculptor and the Scholar-Branly Cadet 101 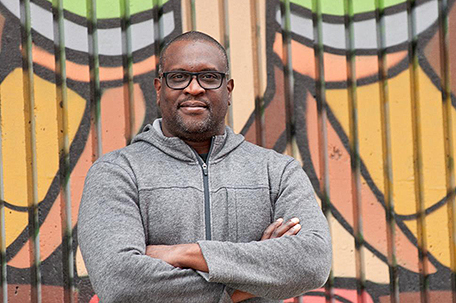 I recently spoke with sculptor Branly Cadet, who revealed his most recent work, the Octavius V. Catto memorial, on the southwestern apron of City Hall two weeks ago.

If you haven’t seen the monument up close — and with hundreds of onlookers, getting a good view was kind of tough — do yourself a favor and check it out for the culture. Take time and really examine the front and back of the monument and all the pieces and literature connected to it. It is truly a sight to behold.

Cadet — a native New Yorker of Haitian descent who currently lives in Oakland, California — was always fascinated with drawing. In a day and age where children could still get in trouble if they weren’t home before the street lights came on, Cadet was busy creating images of things he liked, including superheroes. That love of drawing superheroes manifested into studying renowned figurative artists and led to Cornell University for sculpture, New York Academy of Art with a concentration in figurative art, The Arts Students League, and at the Vaugel Sculpture Studio and L’Ecole Albert Defois in France. One could say he ‘got it honest’ as artistry is in his blood, being a descendant of metal artist Georges Liautaud of Haiti. Cadet has found some inspiration from those works as well.

Cadet apprenticed, studied, and practiced his craft until he was asked to commission small works and 2D items, which led to larger commissions over time. Cadet said people would approach him with requests like; “My daughter’s in college, I want a way to commemorate her or my friend is having his 30th birthday and I’d like to give him a special gift, can you do a portrait of him?” One of his commissions was for a real estate development group leading to public memorials.

As Cadet was painstakingly explaining his research process for the late political figure Adam Clayton Powell memorial in Harlem (another great one to check out), he made it clear that it is important to allow the history, personality of the figure, and detail to speak for itself, conveying the message powerfully. His public commissions include the Catto memorial, a visage of William Shakespeare on a building at 23rd and Sixth Avenue in Manhattan, the Jackie Robinson statue outside of Dodger Stadium in Los Angeles, and the bulldog outside of Dwight-Englewood school in Englewood, New Jersey. 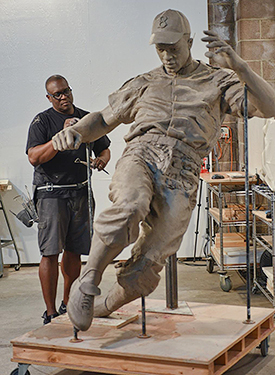 A project 15 years in the making and initiated by Mayor Jim Kenney while still a councilman, the Catto Memorial has so many elements. The process involved a written element of the plan in place, a 2D sketch of the development of the piece and finally a 3D presentation of the design.

There are seven structural elements to the Catto Memorial.

The ballot box is stainless steel, the statue of Catto is bronze and the five streetcar pillars are granite with the back of the car defined with wheels, windows and car elements. Feedback for the statue has been positive overall, with the most touching coming from Catto’s family.

“I am particularly honored that Catto’s descendants feel that their legacy is honored and that’s always important to me,” Cadet said. “So I said ‘I’ve done my job’. I like to try to invoke an emotional response, and with art it has the potential to move us just because, regardless of the medium. That is certainly one of my goals.”

The artist revealed that the process of creation affects him emotionally as well.

“When I’m present to the work that he [Octavius V. Catto] did and how it’s completely related to what’s unfolding now and I’ve shed many tears on that piece,” he said. “Not a sadness, but of being moved by what he represented, what his collaborators represented. There are people who risked their lives for me to even be able to sculpt.”

Through bouts of boyish laughter, Branly said he pulls inspiration from everywhere, including the audiobook “Between the World and Me” by Ta-Nehisi Coates.

“I don’t want to misquote but it was something to the effect of ‘I wanted to be able to write the way that they [ancestors] danced,’ Cadet said. “It was such a beautiful line and I thought of it often as I was sculpting ‘I want to be able to sculpt the way my people danced.’”

If you ask any Black Philadelphian, they will surely agree the goal was accomplished.

Through my conversation with Cadet, I was able to get a feel for his personality and his creative process, as well as his love of reading and research, the importance of collaboration, and the emotional space he seeks to enter when he is molding history. Although Branly Cadet creates imagery people can relish, he sees dreams through to fruition, and allows viewers to emote and imagine through his imagery.

A Cause For Optimism