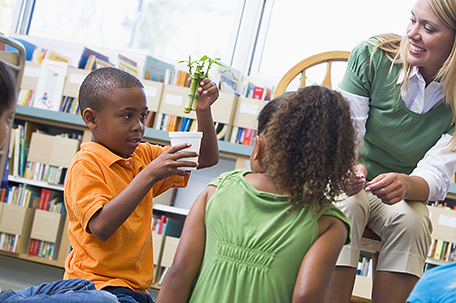 “The District has recently made considerable strides in providing our students with equitable access to green, sustainable resources,” said Dr. William R. Hite, Superintendent of The School District of Philadelphia. “With the support of dedicated partners, staff and stakeholders, this past year has been an affirmation that every school can be great and every school can be green.”

The District was nominated for the award by Pennsylvania Department of Education Secretary  Pedro Rivera, and celebrated the announcement on Thursday at Henry C. Lea School. The award recognizes schools, districts, and postsecondary institutions for their innovative efforts to reduce environmental impact and utility costs, improve health and wellness, and ensure effective sustainability education.

Much of the work related to the award is part of the District’s first-ever sustainability plan, GreenFutures, which was established in 2016. Recent accomplishments include: the construction of nine new green schoolyards in the past year; a $1 million project that was recently completed to install new hydration stations at each school to provide students access to safe, appealing water; a $7 million investment in capital relighting projects to save energy; and the implementation of a “Harvest of the Month” program to provide fresh local fruits and vegetables to students at more than 100 schools.

Across the country, 63 honorees, including nine school districts, 45 schools, and nine postsecondary institutions, were recognized. The honorees were named from a pool of candidates nominated by 28 states and the Department of Defense Department of Education Activity.

More information about the award, as well as the nomination packages of honorees, can be found online at http://ed.gov/programs/green-ribbon-schools.

School District of Philadelphia hosts Back to School Education Day