Obituary: Saying farewell to a people man, and a family man 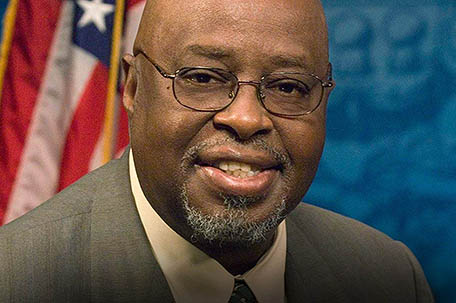 A celebration of life was held for former Pa. State Rep. Harold James — who died on April 28 at the age of 79 —  on May 12 at Yesha Ministries Worship Center at 2301 Snyder Avenue, where Bishop James Darrell Robinson is the founder and senior pastor. The viewing was held the day before, at Rep. James home church, Tasker Street Missionary Baptist Church in South Philadelphia, where Reverend James A. Lovett, II is the pastor.

“We won’t say goodbye…We’ll say so long,” said Liz Roberts, a lifelong South Philadelphia resident who lives in what was the late representative’s district.  “People admired Harold James because he rose through the ranks.” “Harold never forgot from whence he came,” another former constituent of James said. “Whether he was in Harrisburg or taking a stroll down Point Breeze Avenue, he made everyone else around him feel important. We loved him.”

But those who knew him best — his family — loved him the most. To be an impactful elected official, aside from the countless hours you must serve in the state capitol working on legislation, you also have to meet with constituents and supporters in your district office. The loved ones of elected officials make many sacrifices, including sharing them with constituents and others.

That’s exactly what the James siblings did in the case of their father.

“So many people loved and appreciated our father,” Shelina James said. “Growing up, people would often get excited around me when talking about our father and what he did to help them or someone they knew. They would make him sound bigger than life. To us, he was just our Dad and we loved him.”

“I have a different take on my father, because I’m the 2nd oldest of the four sisters [James’ oldest daughter was murdered on May 8, 1987],” Shelina continued. “I have a different generational view than they do. I had the stricter guy. He was always there for us. No matter what. He always tried to keep us close. We always took family vacations. He was just a good father to us. Always there whenever we needed him. Whenever any of us were involved in a program or event, he’d find a way to be there to support us. He was there for Ebony’s dance shows, and he was even there for my daughter as well.  As he got older, he just made the time for everything and everyone in the family, and he went out of his way to do that. I’m actually the youngest in his older set of children.”

All three of the James daughters laughingly recall how he would stay on them constantly about budgeting and knowing how to handle their money.

“He would make me write down how I spent my money when I was a young kid coming up,” Shelina said. “He would also make me get receipts for things I bought and show him the receipts. It was all a part of the process of learning how to live. And when one of us got in trouble, we all got in trouble.”

“I always used to tell everybody my Dad is my person. He was my go-to whenever stuff happened,” said Dawn Blyther, one of James’ other daughters. “If you would ask my Dad to describe me, he would say, “She’s the wild child.” But he always showed up. If you were having something, he showed up. My son started playing football when he was six. Every year, from the time he started playing football, my father’s been there. My son’s 14 now. He’s definitely the rock we all went to.”

“When my father first passed, I got a little selfish —  I just wanted to be able to grieve on my own., without it being so public,” Ebony James added.  “I then had to realize he was a community man, a leader, a politician, a police officer. From all that he did, he created relationships with people and organizations, and people respected and admired our Dad, his being so passionate about lifting up the community. I think I got some of that in me from him. I’m a dance instructor and I work with young teens.  Every time I’m with my students, not only am I teaching them dance, I’m working to instill in them all they need to be good citizens, like my father did all his life. Like Shelina and Dawn said, despite our individual relationships with our father, he always made it a point to keep us connected, which could be really hard to do, but he found a way to do it.”

The other thing the sisters gave their father a lot of credit for was instilling in them pride in their African and African American heritage.

“I’m Black down because of him.” Ebony said.“I love our culture and history. I couldn’t have wanted anything different. I’m proud that he was our father. He was the Dad who would go with you to a Beyonce concert one weekend, and then take all the grandkids to Great Adventure a week later.  That’s who he was.”

Dear Beloved Grandfather
Though we may be veils tangentially apart
Your words and smiles will always be in my heart
Fire and courage lived in your breath
As a man of faith you stood the test
Though rough and rigged in early days
In later years, you weren’t the same
Humbled and sweet like your favorite pie
It is with a bitter sigh that we say goodbye
This is not the end, but the start of everlasting new
We will meet again. Where there will be no more adieus.

Below is the official obituary of Rep. Harold James:

Harold James, the eldest of three children, was born to the late Nellie Mae Moore and Edward James, Sr. in Philadelphia, Pa. on August 7, 1942.  His brother Edward, Jr. and Linda James preceded him in death.  Harold was raised in a Christian home and accepted the Lord and Savior Jesus Christ at an early age.  His committed service was at Tasker Street Missionary Baptist Church under the leadership of Pastor James A. Lovett, II. Although Harold was a lifelong resident of South Philadelphia, he was a proud graduate of West Philadelphia High School class of 1960, where he was known as “Apdula” by friends and a “ladies man” by many.  Harold served in the United States Army from 1961 to 1964.  Following his honorable discharge, Harold returned home and joined the Philadelphia Police Department.

As a police officer, Harold served the city with distinction for 22 years.  During this time, he earned a bachelor’s degree in sociology and an associate degree in criminal justice, along with a certificate in police science from Temple University.  Noting the disparities among officers in the police department and the communities in which they served, Harold led an effort for resolve by becoming a foundational member and ultimately the president of the Guardian Civic League, an organization of Philadelphia’s African American police officers. It was during this time that Harold sought a medium to socialize and discuss solutions to the injustices, which gave birth to his monthly radio show entitled, “The Justice Hour.”  His show has been a staple on the air since 1979 and over the last 15 years, was heard on WURD 900AM.

Because of  Harold’s passion to address social injustices in his community, paired with the nature in which he lost his eldest daughter, he ran and was elected to the Pennsylvania House of Representatives in 1988.  He tirelessly represented the citizens of the 186th Legislative district for 20 years and sought to influence policy to make a change for the better.  As State Representative, he received many accolades and considered his greatest accomplishment helping further the mission of various community groups, one in which he co-founded is N.E.E.D of Philadelphia, a non-profit whose primary mission is to provide financial assistance to students seeking higher education.

Harold followed in his father’s Masonry footsteps and became a 33rd degree Mason of the Most Worshipful Prince Hall Grand Lodge of Free and Accepted Masons, which is the highest level of Masonry. Additionally, he was a board member of the Philadelphia Chapter of the National Association for the Advancement of Colored People (NAACP).

On October 19, 1962, Harold united in holy matrimony to the late Christine Daniels. From this union came three children, Veranica, affectionately known as Tinie, who preceded him in death, Karen and Shelina.  After this union, Harold continued his family legacy with the births of Jamhar, Dawn and Ebony-lin.

Throughout life, Harold conquered health battles; from being shot in the line of duty, to beating the odds with cancer, to kicking COVID to the curb.  He was resilient and continued to defy the odds against him, but on April 28 at 9:25 PM, God said, “Well done my good and faithful servant” and sent his chariot to carry Harold into his eternal life of service.

In lieu of flowers, the family asks that donations be forwarded to N.E.E.D. of Philadelphia, P.O. Box 8244, Philadelphia, PA 19101, or via their website at: www.needphl.org

Caregiving and COVID-19: Tips for people with vulnerable family members