Having Our Say—Centennials Have Never Been So Uncut! 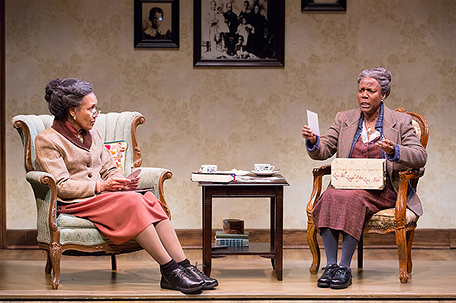 February 1st marked the first day of Black History Month, so it was fitting as the Philadelphia Theatre Company’s opening night of Emily Mann’s production of “Having Our Say: The Delany Sisters’ First 100 Years”.  Staged at the Suzanne Roberts Theater on Broad and Lombard, the production brought together food, family, faith, and forgiveness as two women chronicle their life experiences for a houseguest on the day of what would have been their father’s birthday.  While you may wonder how 100+-year-old women discussing their experiences make for entertainment, I challenge you to go see for yourself as the production runs until February 19th.  I must say, I was skeptical myself, but as the stage lights came up, within the first five minutes eldest sister Sadie Delany (Perri Gaffney) was cracking jokes.

My skepticism was further cast aside as the play progressed as the format was reminiscent of Ancient Africa—a griot passing down tales to village folk.  We never see the guest’s face and don’t need to, as the audience served as the placeholder, laughing and sighing when appropriate.  The Delany sisters’ did not bite their tongues from the moment they spoke—from their father’s experience as a former slave to witnessing ‘Whites only’ signs go up in their North Carolina neighborhood, they minced no words when it came to Black oppression.  They chose to be lighthearted and comedic on the subject matter because, “Oppressed people have a sense of humor.”

Sadie and Bessie (Cherene Snow) don’t show their age at all because: ‘Black don’t crack’ and they stayed active by taking up yoga and eating right. They also attributed their aging so gracefully to the fact that “we never married and never had a husband to worry you to death”. The sisters are situated in a small home in Mt. Vernon New York, but they had quite the journey leading them there.

The first half of the play gives a great explanation of the two women as a unit as well as apart.  Sadie, 103, is the eldest of the two and possesses a sweet, caring, and meek demeanor while Bessie, 101, is fiery, outspoken, and stubborn.  Although they couldn’t be more different, they find common ground and work together, finishing each other’s sentences while preparing their father’s favorite meal: ham, stuffed chicken, turnip greens and carrots and pound cake and ambrosia for dessert.

The visuals for the production were awe-inspiring, as the set rolled forward and backward depending on the room the ladies were in and family photos were projected over the house for easy audience interaction.  Certain scenery changes would display a montage of Jim Crow and Civil Rights era images.  These images were just enough for the audience to understand the era and perfect for the tone the women were setting.  From Raleigh, North Carolina during the reconstruction period to Harlem in the Roaring 20s, we learn so much about these two women and their take on the world as daughters, aunts, and scholars.  “Having Our Say” further amplifies the point that it is vital to keep in contact with our elders and let them speak on their experiences as we can learn so much from whence we came.

Philadelphia Theatre Company celebrates the extraordinary Delany Sisters in “Having Our Say”-Jan. 27-Feb. 19