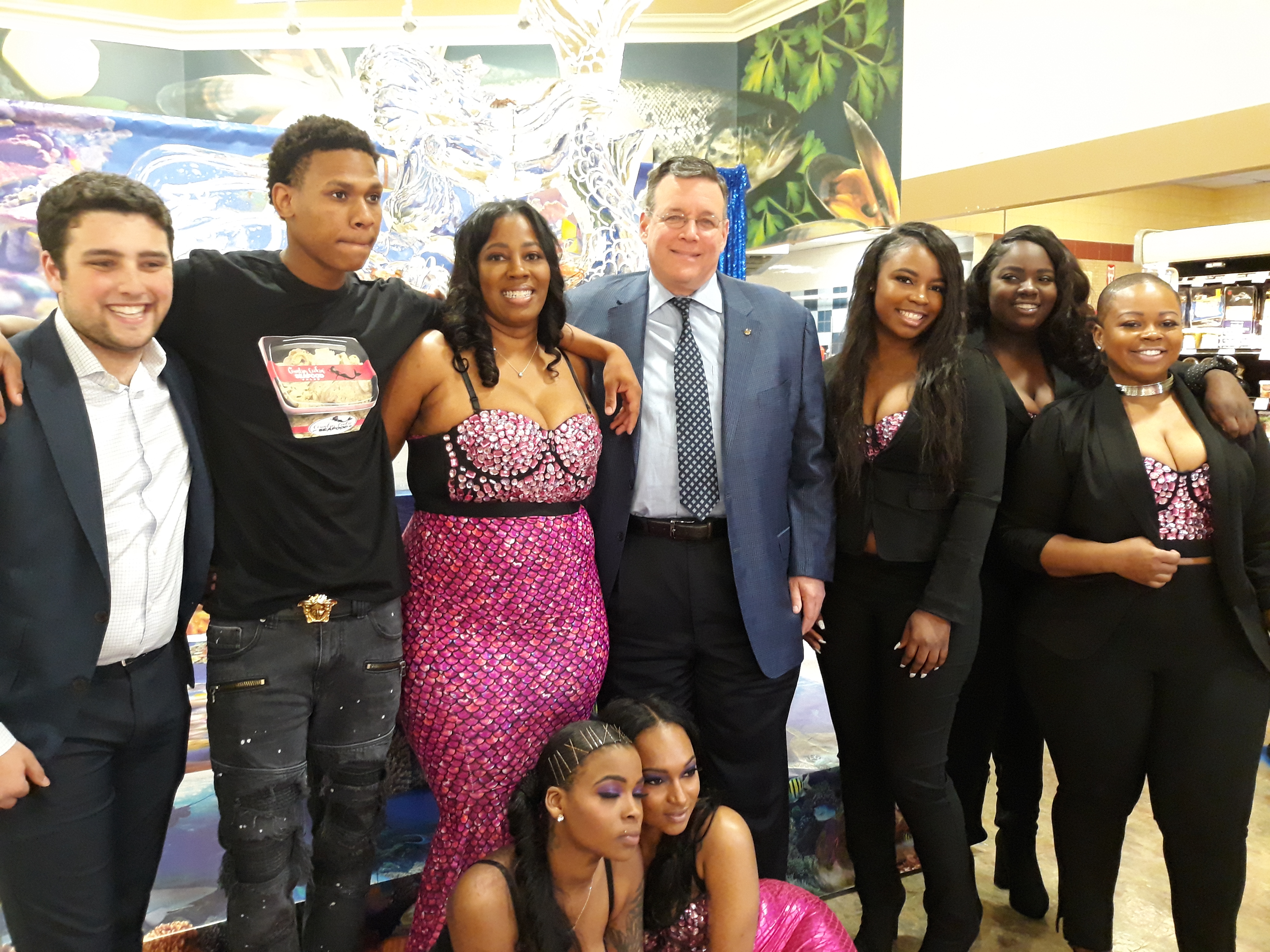 “We’re sold out!” says Saudia Shuler with a smile as she gives a customer in line a warm hug at her supermarket launch.

Although you can still buy the seafood salad at her Country Cookin’ restaurant, it is now sold exclusively at the Brown’s ShopRite of Fox Street location.

Not everyone waiting in line was lucky enough to snag the coveted seafood salad for purchase.

Customers were lined up since 8 a.m. waiting for the noontime debut.

“I’m overwhelmed, this is a lot. I didn’t think it would be this many people,” said Shuler.

All 1,000 units of Shuler’s seafood salad, sold out in less than an hour.

Yes, you read that correctly. 1,000 units sold in less than an hour (let that sink in for a second).

Loyal and new fans stood in line, some for hours, to get a photo with Shuler with their newly purchased seafood salad.

Shuler, true to her larger than life personality, was in grand style with a mermaid-like dress.  She posed eloquently next to a beautifully carved ice sculpture that showcased a bowl of her seafood salad alongside cooked shrimp and crabs on display.  Two gorgeous female models, dressed as mermaids in full costume, lay beneath the display smiling for the customers and giving those in attendance the total aquatic illusion.

Shuler’s son, Johnny Eden Jr., and the Brown family, Jeff Brown president and CEO of Brown’s ShopRite, his wife and co-owner Sandy and their son Scott all joined Shuler for the exclusive debut.

This is a beautiful turn of events given the tough year Ms. Shuler has had.

She ran into some legal issues regarding working and collecting disability.

Shuler, who survived a stroke five years ago, still suffers from complications.

“I crawl up the steps every night believe it or not. I just don’t let the public see that because I don’t want people feeling sorry for me,” said Shuler.

Noting that after getting home from work, she sometimes cries trying to get up the stairs.

Her son Johnny has to help her.

“When I work too hard, my left side starts giving out from the stroke,” she said.

“After all that I’ve been through with my legal situation, Mr. Jeff Brown really stood behind me when a lot of people turned their backs on me.  He stayed right there with me, didn’t give up on me,” said Shuler.

“A lot of people made me promises before the event, but a lot of people backed away from me as if I was a bad person.  Everybody makes mistakes,” continued Shuler who also thanked Judge Juan Sanchez for giving her a second chance.

It was noticeable that Jeff Brown was equally excited about the new product being available exclusively at his Fox Street location. He cross-promoted Shuler’s product heavily on his personal Instagram account leading up to the June 11 store debut.

“Saudia came to me about a year ago with the idea of bringing some of her products to the market,” said Brown.

“I found her to be a fantastic person, whether its giving people from her neighborhood jobs, teaching them the restaurant business or all the social things she does to help people.”

“I see our relationship as beyond just the food. The food is our way to care for people and to help people.” continued Brown.

Back in 2017, Shuler who has over 256,000 Instagram followers, went viral internationally as the “Camel-prom Mom” because of the elaborate Dubai-themed prom send off she created in North Philadelphia for her only son Johnny.  She then went on to give other youth in the community their dream prom.

Shuler is a community matriarch, always using her platform to help and promote others. It’s not unusual to see Shuler hosting and promoting a charitable cause in front of her restaurant to benefit her community, such as her annual book bag or winter supplies clothing drive for families in need.

Shuler’s Country Cookin’ has plenty of popular dishes that keeps her loyal customers and attracts visitors from as far as California to the restaurant.

Her many platters include Cuban stewed shrimp, stuffed salmon, oxtails, chicken breast bites in a variety of styles (Asian, honey barbeque), jerk chicken, fried fish and much more. Her mac-and-cheese and yams are also some of her customers’ favorite items at the restaurant.

Initially, Shuler wanted her gravy to be the first item sold at the market.

“But, Mr. Brown, he sees me make seafood salad on Instagram all the time,” said Shuler about Jeff Brown’s recommendation to sell the popular seafood salad as the first product.

Shuler makes the seafood salad from scratch on Instagram with shrimp, real super lump crabmeat and imitation crabmeat–which she refers to as “mermaid meat,” bragging  with her famous slogan “Y’all See It!”

Smiley Mango, a customer at Shuler’s Country Cookin’ restaurant, stopped by the supermarket to support.

“I love Black businesses. I love to see us grow. And, I wanted some of that seafood salad,” said Mango.

Dan Ward, also a customer at Shuler’s Country Cookin,’ says the [chicken] breast bites is one of his favorite platters. However, he could never purchase the seafood salad at the restaurant.

“It’s always gone,” he said when he visits the restaurant. “I’m super excited to try it,” said Ward.

As for Shuler, she still continues her mission to help and support others.

“I feel like if you support other people, they are going to support you.”

So, what will be Shuler’s next extravagant event she has planned for the youth in her community?

Stay tuned…we can’t wait for her next extravagant surprise for youth in her community, or better yet, one of her famous platters with a side of that seafood salad.

Saudia’ Shuler’s Country Cookin’ restaurant is located at 2836 N. 22nd Street in Philadelphia. The hours are Thursdays through Saturdays noon to 10 p.m. and on Sundays from noon to 8 p.m. Telephone numbers for the restaurant are 267-625-3664 or 267-505-0594.  Saudia Shuler’s Seafood Salad is also available for purchase exclusively at Brown’s ShopRite located at 2800 Fox Street in Philadelphia. Follow Country Cookin’ on Instagram at instagram.com/countrycookin1  and on Facebook at “Saudia Shuler’s Country Cookin”

A guide to seafood for every taste and any budget