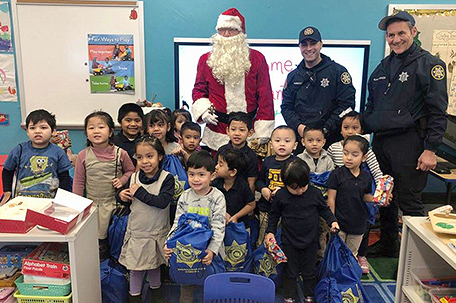 The Deputy Sheriffs joined Santa Claus on Wednesday for a visit at the Taggart Head Start program in South Philadelphia.

They were delighted to be able to spend time with these wonderful children who were very excited, not only to receive toys and meet Santa, but also to hear a little bit about what they do at the Sheriff’s Office.

On Tuesday, they joined forces with the First Judicial District to share holiday cheer among a special group of young people at City Hall.

Fifteen families were selected among young mothers and fathers under the age of 25 who are having a second chance at life.

As a result of their brush with the law, they are not able to purchase gifts for their children.

“We are extremely excited by this partnership with the Sheriff’s Office,” said Terrill Carney, co-director of Mentor Re-entry Court. “This is an excellent move, helping young people who trying to change their lives around for the good of themselves, but most of all for the good of their children.”

The Sheriff’s Office and First Judicial District hope to make this an annual partnership, working with young people to break the cycle of recidivism.

“Our jobs can be stressful, but to see people working to never return to our cells and courtrooms is always the bright side of a day,” said Sheriff Jewell Williams.