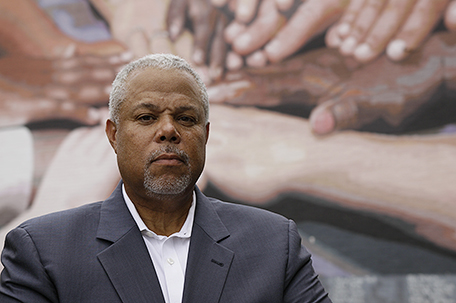 Don’t get him wrong. State Sen. Anthony H. Williams has enjoyed being a legislator. But now instead of initiating policy, he’s hoping to implement it as Mayor.

The Run For The Big Chair

[Editor’s note: This is the first in an occasional series of interviews that the SUN will be the people running for Mayor of Philadelphia between now and the May 19th Pennsylvania Primary.]

For much of the last 27 years, State Sen. Anthony H. Williams has been influencing public policy as a lawmaker.

From his 10 years spent in the State House to his current term in the State Senate, Williams has spent much of his time helping to create the laws that govern the Commonwealth, but not having much of a say in how those laws were implemented and how they impacted the City of Philadelphia, the place he’s represented for that 27 years.

While having your name on a law is nice, it’s not nearly as nice as making it work for your constituents.

“I’ve always been committed to trying to help people,” Williams said. “But I’ve always had a yearning to do it as a CEO, to push the policy forward.”

So Sen. Williams is hoping to become Mayor Williams. The popular wisdom has him listed as the frontrunner for the job. But while his connections to charter school groups are a little too much for some to stomach, he believes that he can bring unity to a city that’s often hard to get on the same page.

“I’ve always tried to unify rather than divide,” Williams said. “We all love this city, and we’ll all be better served if we’re unified.”

The SUN had a chat with the longtime lawmaker about what he thinks Philadelphia’s biggest issues are, how he’ll handle them and why calling him the “charter king” isn’t factually correct.

SUN: Thank you for your time Senator. I guess I’ll start by asking you what made you decide to run for Mayor? You’re a Senator in a pretty secure district. Why make the change?

AW: It’s something that I’ve been inspired to do. My parents were very active in the community through organizations like the NAACP. Their service has impacted my entire life.

SUN: What do you see as the most important issue Philadelphia faces right now? And how would you tackle it?

AW: I don’t think that there’s one big issue. We have three major issues that are all interconnected. We need to have a city where our kids can get a quality education, an economy that produced jobs and encourages entrepreneurship and to make sure that everyone’s safe and improve public safety.

SUN: One of the issues that we’ve chosen to focus on as an editorial board here at the SUN is the issue of education.

There’s been a lot of discussion about funding. Mayor Michael Nutter has proposed a 9 percent increase in property taxes to provide more funding to the schools because the city needs to contribute more. There’s also a resolution that’s been placed on the ballot demanding local control be restored to the district. What is your plan to address this issue?

AW: I’ve been working on school budget issues as a legislator since I’ve been in office and I’ve gotten money for schools. The 1 percent sales tax was my bill. The $2 cigarette tax was my bill. I didn’t like it, but it was my bill. Funding for the schools is essential and we have to find a way to increase the city’s portion to the district without having to raise any more taxes.

We have to get the funding issues straightened out before we talk about local control. The state provides 62 percent of the district’s funding. That’s more than the other districts that the state controls. That’s more than Chester. At some point the School Reform Commission will disband. Before we get the school district back, we have to have a plan for funding it without big deficits.

SUN: But let’s be honest here, Senator. You have a lot of people who don’t quite trust you when it comes to the schools. When they look at your campaign finance reports and see contributions from so-called school reform groups, they see you as someone who is far too indebted to the charter schools to want to see conventional public schools get what they need. How do you change that perception?

AW: I’d rather reflect on my record. I’ve done more than any of the other people running for schools. It’s not accurate to say that I’ve only supported charters because I’ve also supported traditional public schools. I’ve supported schools like the Penn Alexander School in my district. I’ve supported magnet schools like Masterman and special admission schools. I support good schools.

And I’m not the face of charter schools. The parents are. While people may not like charters, there are waiting lists for them. There’s a demand for them.

SUN: Another issue that’s been on the minds of Philadelphians is the issue of public safety. The American Civil Liberties Union has just released a report that says that despite a 2011 consent decree, the Philadelphia Police are still practicing stop and frisk. Roughly 80 percent of all of the stops are of Black and Latino men. What would you do about this as mayor and what would you do to improve police/community relations?

AW: Stop and frisk costs the city a lot of money and isn’t fair because its based on stereotypes. We need to develop different ways to make people feel safe. Not only would I like to see cameras on police offices, I’d like to see cameras set up in hot spots so that the police can do their jobs better.

I’d also like to see more diversity in terms of recruiting police officers. Our police department should have people of all walks of life. We should have a force filled with critical thinkers.

SUN: But in the case of actual police/community relations, there was a time where there were substations in neighborhoods, something that allowed residents to get to know the police officers that walked the beat in their neighborhoods. Would you be willing to consider a return to that?

AW: If the people in those neighborhoods want a substation, that’s fine. Those substations were requested by communities and staffed by volunteers, so if they asked for it, we could do it.

AW: Yes, I do. Not just because I’m a State Senator, but because I try to unify people with everything I do. In order to get the cigarette tax passed, I had to work with [former Majority Leader] Dominic Pileggi, [Senate President Pro Tempore] Joseph Scarnati and [House Majority Leader] Mike Tarzi to get it done. I understand how Harrisburg works.

SUN: What about City Council?

AW: I have four members of City Council supporting me. I think that if I’m elected, I’ll work with Council well.

SUN: One last question. Now your father, the late State Sen. Hardy Williams, is considered the first Black candidate to make a serious run for the Mayor’s office. How old were you when he ran and do you remember much about his run?

AW: I was about 12 and I remember that he worked with people from across the city, from different communities. Over the last two years, I’ve done the same. He was deeply respectful of the value of others.

This is where I come from. I come from people who taught me that this is one city and that we have to work on our problems as one city.

SUN: Well, thank you for the time Senator Williams. Good luck to you.