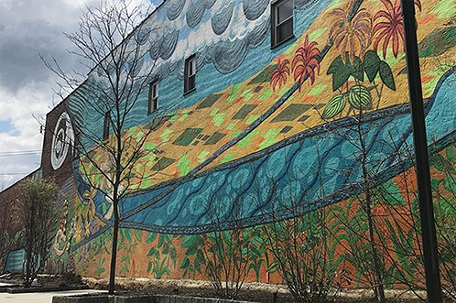 ABOVE PHOTO:  The mural “Watershed” by Paul Santoleri at the Roxborough Pocket Park.

Earth Day weekend had special significance in Roxborough this year  as the community welcomed the long-awaited Roxborough Pocket Park on Ridge Avenue between Krams and Leverington Avenues.

Highlighting a rain garden and other green stormwater tools that protect local waterways from runoff, the vibrant mural and mosaic work includes aquatic wildlife and other nods toward the neighborhood’s rich history with the Wissahickon Creek and Schuylkill River.

The Pocket Park mural, overlooking what had long been a vacant lot, was created through a partnership including the Philadelphia Water Department and Mural Arts Philadelphia.

Described as a “public flex space,” the $600,000 revitalization began in June 2015 as part of the Roxborough 2020 initiative, which engaged over 700 neighborhood stakeholders to envision improvements to Ridge Avenue and the Roxborough neighborhood over the next five years.

Joanne Dahme, a Roxborough resident and general manager of PWD’s Public Affairs division, was also honored by Manayunk PA and the Roxborough CDC with an award recognizing her efforts to revitalize the area through the arts.