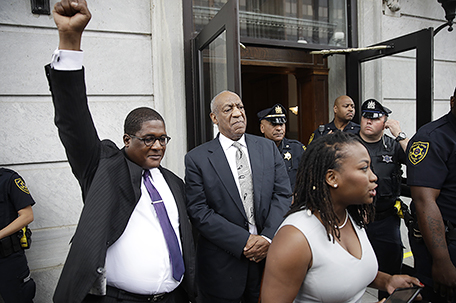 ABOVE PHOTO:  Andrew Wyatt raises his fist as Bill Cosby exits the Montgomery County Courthouse after a mistrial was declared in Norristown, Pa., Saturday, June 17, 2017. Cosby’s trial ended without a verdict after jurors failed to reach a unanimous decision. (AP Photo/Matt Rourke)

By getting a mistrial, comedian Bill Cosby won Round 1 in his fight with Montgomery County District Attorney Kevin Steele. But in four months, they’ll be a rematch.

When he walked out of the Montgomery County Courthouse with a declared mistrial and his bail continued, no one could blame comedian Bill Cosby for having a little spring in his step.

Whether it’s still there in four months will depend on whether or not Montgomery County District Attorney Kevin Steele makes good on his threat to retry the case.

After spending 52 hours deliberating, the jury in Cosby’s sexual assault case told Judge Steven O’Neill that they couldn’t come to a decision on any of the counts of aggravated indecent sexual assault leveled against him. Cosby was on trial for allegedly sexually assaulting former Temple University employee Andrea Constand in 2004.

The jury had been deadlocked for days before the judge let them go on Saturday.

For those in the Cosby camp, the decision gave them the chance to let their feelings  be known, especially the comedian’s wife, Camille. From Judge O’Neill (“overtly, and arrogantly collaborating with the District Attorney,”) to the attorneys representing her husband’s other accusers (“totally unethical”) to the media (“Blatantly vicious entities that continuously disseminated intentional omissions of truths for the primary purpose of greedily selling sensationalism at the expense of a human life”) to District Attorney Steele himself (“Heinously and exploitatively ambitious”). Mrs. Cosby’s written statement, which was read by a representative, had something for everyone.

It even included some complimentary words for Cosby’s lawyers.

“I express humongous gratitude to counselors Brian McMonagle and Angela Agrusa for their hard work,” the statement said.

For Cosby spokesman Andrew Wyatt, the decision allowed him to get a final dig in on noted attorney Gloria Allred, who was on hand for the entire trial and is representing 33 of the comedian’s accusers in various legal actions.

“Mr. Cosby’s power is back!” Wyatt exclaimed. “His legacy is back! And somebody needs to tell Gloria Allred to go back to law school!”

While she won’t be going back to law school, Allred acknowledged that this isn’t the end of Cosby’s days in court.

And his celebrity might not save him this time, she said.

“It’s too early to celebrate, Mr. Cosby,” Allred said. “And this time, justice may prevail. We can never underestimate the blinding power of celebrity, but justice will come.”

For his part, Steele is committed to retrying the case as a means of supporting Constand’s bravery.

“This is a case we know has been important for sexual-assault victims everywhere,” Steele said. “She has shown such courage through this. … She’s entitled to a verdict in this case.”

No retrial date has been set.