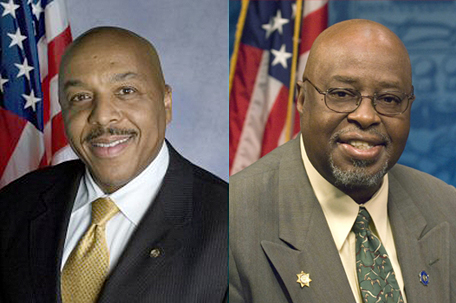 HARRISBURG, Pa. — One current and one former Democratic state lawmaker from Philadelphia pleaded guilty to conflict of interest on Monday and received probation for their contacts with a lobbyist who secretly recorded his exchanges with public officials.

Rep. Ron Waters’ agreement to plead guilty to nine counts of conflict of interest requires him to serve 23 months on probation and resign the seat he first won in 1999.

Former Rep. Harold James pleaded guilty to a single count of conflict of interest and received 12 months of probation.

The charges were among those filed by Philadelphia District Attorney Seth Williams after state Attorney General Kathleen Kane declined to pursue an investigation built on secret recordings by lobbyist Tyron Ali.

The investigation began in the state attorney general’s office, but after Kane, a Democrat, took office in 2013 she declined to pursue the matter, saying the case had been mishandled.

Williams, also a Democrat, disagreed and took up the matter, filing charges after a six-month grand jury investigation into both the allegation and Kane’s decision to forgo prosecution.

Kane and her aides said the case was poorly conceived and managed, gave Ali a particularly lenient deal on his own charges and targeted black officials without cause. The grand jury under Williams said Kane’s top lieutenants did not believe her reasons for stopping the case. All of the defendants, and Williams, are black; Kane is white.

“They took the money not because they were targeted or tricked, but because they wanted it,” Williams said as he announced charges against Waters and Brown.

Ali made dozens of recordings as he distributed thousands of dollars to state lawmakers — and gave an expensive bracelet to a city traffic judge, Thomasine Tynes.

“So when are you going to explain to me what you get out of the deal?” Brown said during a meeting in which she took $500, according to the grand jury. During another exchange, in which Ali gave her an envelope containing $2,000, the grand jury said her response was: “Ooo, good lookin’! Ooo wee! … Thank you twice!”

The jury said Waters, after getting $1,000 from Ali at a birthday party, responded: “Happy birthday to Ron Waters.”

Ali started working for the attorney general’s office after his 2009 arrest on charges he stole $430,000 from a state program for low-income children and seniors. He had 113 meetings with public officials and others from 2010 through 2012. Prosecutors agreed in late 2012, before Kane took office, to drop more than 2,000 fraud charges against him.

The state constitution prohibits public officials such as state lawmakers from holding office if convicted of felonies and certain other categories of crimes.

Tynes, 72, a Philadelphia traffic court judge, pleaded guilty to conflict of interest for taking a $2,000 Tiffany silver bracelet from Ali. She was also caught up in a separate investigation of traffic court ticket-fixing and is currently serving time for perjury in a Texas federal prison.

“I’ve served with Ron for 16 years and consider him a friend. Today he accepted responsibility for actions he took and he will face the consequences,” Dermody said.

“I will ask Speaker Mike Turzai to schedule a special election in the 191st District as soon as legally possible. This is in the best interests of more than 60,000 Pennsylvanians who deserve a voice in the House while the state budget and many other crucial issues are considered this summer.”