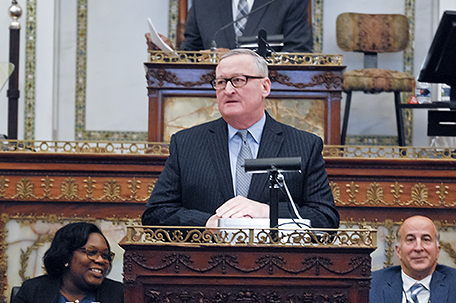 Helping Philadelphia’s City Council pay for its poverty reduction “moonshot” is the focus of much of Mayor Jim Kenney’s 2021 budget plan.

Last week, City Council President Darrell Clarke and City Council’s Special Committee on Poverty unveiled a plan that the group hopes will take 100,000 people out of poverty by 2024.

When the plan was unveiled, the committee chaired by Councilmember Maria Quinones Sanchez was asked where the monies to pay for such things as intensive job training, and money for rent subsidies and other assistance.

When he unveiled his 2021 fiscal year budget and five-year plan last Thursday, Mayor Jim Kenney told the members of City Council just how much fuel he’d be able to provide for what Clarke has referred to as the city’s “moonshot.”

But while both the mayor and Council are committed to reducing the city’s 24% poverty rate, the highest among cities its size in the nation, they aren’t 100% on the same page when it comes to how, particularly in the area of where the funds should go.

The $5.2 billion plan includes a 29% spending increase, but no new taxes. It also has a lot of spending specific to combating poverty, and $2 billion earmarked for education, including $63 million designed to go to Community College of Philadelphia to create a scholarship named for educator and activist Octavius V. Catto.

The Catto Scholarship is what’s known as a “last dollar” scholarship, meaning that it covers what’s left of a student’s tuition after financial aid has been applied. Sometimes, those dollars are all that stands between a college student and the next phase of their lives, Kenney said.

“The evidence is clear,” he said. “A postsecondary credential or college degree is essential to thrive in today’s rapidly changing economy. Yet rising costs of higher education and the student debt crisis are harming students’ ability to access — and complete — their education.”

“Raising the city’s two- and four-year degree attainment rates is a major component of our inclusive growth strategy,” Kenney continued. And if we are serious about achieving that goal, we must address the dual challenges of tuition affordability and basic needs insecurity.”

The scholarship will also give students in the program $1,500 a semester to help with books, transportation, and food and city officials will also work with Community College to help these students find childcare, housing assistance, and other supports to keep them on track to graduate, Kenney said.

In addition, $700,000 for summer bridge programs and dual enrollment programs designed to get students ready for college is included in the Catto Scholarships. The scholarship will benefit about 6,500 students over the next five years.

Police Commissioner Danielle Outlaw will also be getting some financial help through this budget should it pass. Operation Pinpoint, a program designed to target areas where deaths due to gun violence are high is getting $5.7 million for staff and technology and will be expanded to three other police districts, Kenney said. Also, $360,000 will be used to expand the Employee Relations Unit of the Mayor’s Office of Labor, allowing them to investigate issues of gender discrimination and sexual harassment, the issues that forced former Commissioner Richard Ross out of the office.

The budget also includes money to address the city’s opioid addiction crisis, including $2.3 million to expand prevention efforts and address quality of life issues in Kensington, the epicenter of the epidemic.

A woman was walked out of Council chambers for yelling “sneak!” at Kenney when he restated his commitment to safe injection sites as a means of preventing heroin overdoses. While he admits that Safehouse’s recent attempt to put a site in South Philadelphia was undertaken without consulting the community, repeating the mistakes of the War on Drugs won’t help, either.

“We cannot let history repeat itself simply because we’re afraid to try new, albeit controversial, approaches,” he said. “And I know that we all agree the City must do more to save lives and help our fellow Philadelphians reach their God-given potential.”

“With all that said,” Kenney continued, “I want to be very clear that I refuse to look another parent in the face and tell them I didn’t do everything I could to try and keep their child alive long enough to survive their disease.”

But while Council agrees that doing nothing in the face of a growing opioid crisis is wrong, they also let  Kenney know that it wasn’t keen on safe injection sites through a vote it took before his address..

Council voted 15-2 to pass a resolution condemning the mayor’s safe injection site plan and the way that Safehouse tried to implement it.

Armed with the district court decision in its favor, Safehouse tried to open what would have been the nation’s first safe injection site at the Constitution Health Plaza, located at 1930 S. Broad St. The plan was met with a mountain of opposition from neighbors and City Councilmember Kenyatta Johnson, and eventually Safehouse’s lease with Constitution Health was cancelled.

Many of those gathered in Council chambers spoke in favor of the resolution, which was proposed by Councilmember David Oh.

“We need for you to let us know when these things are going to take place, so that we can be there and have our input,” said Maureen Fratantoni, a resident of South Philadelphia. “I’m all for recovery. Make clinics where they can recover, that make them clean, not where they can kill themselves.”

The two “no” votes on the resolution were Councilmembers Kendra Brooks and Helen Gym. Brooks based her objections on the damage that the War on Drugs did to the African American community at the height of the crack epidemic.

“I have seen firsthand how the government can respond to the addiction crisis,” Brooks said. “My community, my family are still recovering from the War on Drugs that criminalized and incarcerated Black people at a shocking rate. The Black Community, the trauma still reigns in our bodies, and it would be unforgivable to repeat the same mistakes.”

“What we know now is that criminalization and incarceration do not save, but endanger lives,” Brooks continued. “We also know that while the opioid epidemic is largely presented as a public health crisis that impacts the White community, black and brown people are over represented among those who are dying of drug overdoses.”

“Being a young male who grew up in South Philadelphia my whole life, I’m not going to let anyone lecture me on what my community looks like when it comes to drug addiction, whether it’s the crack epidemic that ravaged our community or most importantly, the heroin addiction that didn’t start just now,” Councilmember Kenyatta Johnson, whose district includes Constitution Health Plaza, retorted. “If this site was proposed in Rittenhouse Square or if this was proposed in Manayunk, this would be a different conversation.”

The bill connected to the resolution, a bill that would give safe injection sites the designation of “nuisance medical sites” and subject them to a higher threshold for operation, was passed out of Council’s Health and Human Services Committee after a hearing on Monday.

A Rocket For The Moonshot