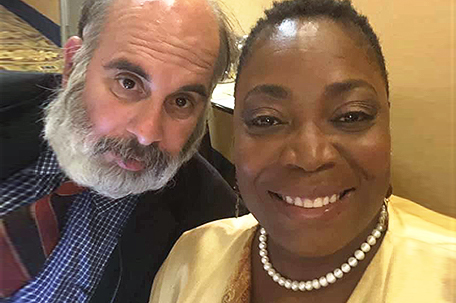 Photojournalist Robert Mendelsohn was born October 28, 1957, and was the baby in his family. When he transitioned from this life last week, Robert left a gaping hole in the hearts of many who had loved and worked with him for decades.

He was so committed to his craft and his love of people, it was not unheard of that he would take several buses, and then walk great distances to capture their events through his lens.

According to his sister, Judy Mendelsohn-Marcus of Delran, New Jersey,  he fell in love with photography in 1970, after capturing pictures of celebrities on “The Mike Douglas Show,” which aired on KYW-TV in Philadelphia. He had quite a portfolio of those pictures, as it was well before the internet and social media.

When that gig ended, Robert worked a 9-5 job in Center City, but did not like it, so he went back to photography — his first love.

He transitioned from capturing the faces of the famous to parties, graduations and other events locally, and that is how he earned his living, going from job to job, Mendelsohn-Marcus said.

“He gained so much satisfaction in doing what he loved, and the people around him,” according to his remaining sibling, who emphasized that her brother was a very private man.

Even more importantly, he settled in Germantown. He chose to live in the Black community, because he felt “welcomed” there, Mendelsohn-Marcus said.

“He didn’t have two nickels to rub together many times, but my brother was happy to live a simple life. He never asked us for anything,” she said.

The first time I laid eyes on Robert Mendelsohn, I asked myself, “Who is this scruffy looking dude, with a mouth filled with shrimp, hugging everyone?” Two minutes later, after being introduced, I was loving him, too, because he was authentic and kind in a way that is so refreshing and endearing!

The “walking photographer” is what I called Robert Mendelsohn. He would pop up in the most random places, at the most random events, and I often marveled to him that he was everywhere! He would smile and say, “I love people and I love taking pictures.” And he loved to eat. There wasn’t a buffet, especially one with shrimp, that could get by him, his sister agreed.

In 2012, he was honored as an “unsung hero,”  by a local organization and it meant the world to him, as he was not usually acknowledged for his body of work. He fully appreciated the kindness that was extended to him, his sister said, especially those who picked him up and took him home, because he thrived on being appreciated.

Connie Grier from the Respect Alliance, offered these words:

“Robert was a consummate photographer who had not only a passion for photos…he had a passion for people, and that’s what made him so great. His grind is legendary as he was not a driver, but made it out to everything all over this city.

He loved and was loved in return by so many, across neighborhoods, across nationalities, because he was just himself. No airs, no facades, just him doing what he loved and enjoying himself and life in the process.

I was just speaking about him last night, so to hear he passed away…. it was more than shocking. He will definitely be missed and us deserving of all the tributes he receives. Rest easy, off of your feet at last, love.”

“Of what use are lens and light to those who lack in mind and sight?”

“It’s a fitting statement for a man who I’ve known for many years. He’s covered sooo many Black events —  it’s a rough day to capture Mendelsohn without crying. He’ll be missed for his smile, walk and camera. He’s been greeted by many of our family and friends whom are in heaven. It’s why the sun is shining so bright today and we’ve had days with so much rain!!! RIP Robert Mendelsohn.”

The last time I saw Robert, we attended Davida Godett’s funeral, and his heart was shattered. His sister agreed that he had a broken heart, because she was one of his dearest friends — and so, in the midst of our collective shock and grief, we can take “heart” in knowing, he is with her walking around heaven somewhere, offering tokens of love and finding the Black people who are loving him in death, the way he loved us in life.

Rest well sir. Those shoes, and you, have earned it.