Roary, Community College of Philadelphia’s new mascot, finds their place and their pride 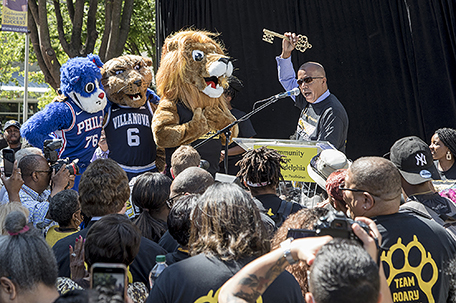 ABOVE PHOTO: In recognition of Roary’s debut, and as a trusted friend of the Philadelphia community, Community College of Philadelphia (CCP) president Dr. Donald Guy Generals awards Roary the official key to the College.

Roary, Community College of Philadelphia’s new mascot, arrived on Main Campus today to fanfare, with music blaring, people dancing, and the roar of their pride.

In keeping with the College’s commitment to provide a welcoming and inclusive learning environment for all students and all Philadelphians, Roary identifies as non-binary and uses they/them pronouns.

This is Philly’s second non-gendered mascot, the other being Squiggles at the Please Touch Museum. Roary is believed to be one of the first non-binary college mascots in the nation.

Following Roary’s dramatic entrance, the crowd of students, faculty, staff and well-wishers made an attempt to set a world record for the most people roaring simultaneously. The milestone will be celebrated later in the school year, once verified by the Guinness Book of World Records.

The new mascot presents an opportunity to look for new ways to promote inclusiveness and discuss important topics like gender identity. The College opened the MarcDavid LGBTQ Center on Main Campus last fall and conversations are ongoing regarding the usage of correct pronouns, the value of safe spaces and more.

In 2017, CCP students petitioned the College to find a mascot that better reflected the strength, power and resiliency of the College’s diverse athletes and students. After a committee of students, staff and faculty met to consider suggestions for the mascot and team names, the College held a vote last fall, with the Lions triumphing over the Panthers. The athletic teams have been known as the Lions for the past year, but the mascot’s identity has been kept secret until today.

As the crowd gathered on campus today, they learned that Roary’s family moved to the United States when Roary was just a cub. They left their pride in Chief’s Island in Botswana’s Oskavango Delta and seeking a better life, Roary and their family made a home in Philadelphia. But it wasn’t until Roary first climbed the stairs to CCP’s Mint Building and was greeted by the brass lions guarding the entrance that they truly felt at home.

Roary will entertain their pride tonight as CCP’s volleyball team takes on Valley Forge Military Academy & College at 6 p.m. in the College’s Athletic Center. CCP’s powerhouse athletic programs date back to 1967 and the teams – including basketball, cross country, men’s soccer, and volleyball – hold a collective record for 60 divisional championships in the EPCC (Eastern Pennsylvania Collegiate Conference) as well as 23 state championships.

Roary’s job is to engage the entire community in the support of athletics, and student success, in general. “When you’re not accepted or respected, it’s hard to focus on your schoolwork,” said Vincent Scarfo of the LGBTQ center. “The arrival of Roary is just another sign that all are welcomed here.”