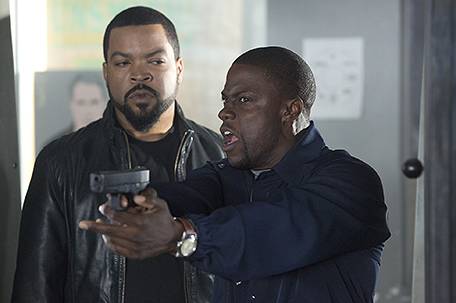 Today is the era of texting and social media. Calls, love letters, and asking permission to date a woman seem to be outdated ideals. In the film Ride Along, we get back to the basics. High school security guard and gamer Ben Harper, played by Kevin Hart wants to marry his girlfriend Angela, played by Tika Sumpter but first he must gain the approval and blessing from her overprotective brother Detective James, played by Ice Cube.

The story spirals into a series of unpleasant predicaments as Detective James puts Ben through the ringer to prove himself worthy of his sister’s hand. I had the opportunity to speak with Kevin Hart and Ice Cube about their experience on the film.

Kevin Hart and I grew up in the same North Philadelphia neighborhood. Despite having to overcome a great deal of obstacles, he has achieved global success. Hart has hosted “Saturday Night Live”, sold out Madison Square Garden for his stand up film Let Me Explain, and his filmography is growing rapidly with no stop in sight. After sharing stories about neighborhood food favorites like King of Pizza, I was interested in finding out how Hart felt being back in his hometown.

Hart said, “At any point of success to come back and show that you still care is always huge. You never want people to think you’re too big or that you’re better than them. Coming back to where your original roots are and bringing something of this magnitude to the scene shows that not only do you still remember, but hey I’m here and I’m not going anywhere. The only thing that’s changed is that the movies have gotten bigger… I’m still the same Kevin.”

I asked Kevin if he planned on putting his daughter’s dates through the same turmoil that Ice Cube inflicted on him in Ride Along.  He responded “My daughter is not allowed to see a man until she’s 35.”  Hart’s work ethic and comedic talent bring laughter and joy to the big screen in a way that is unique.

Ice Cube, known for his work both on screen and behind the scenes, teamed up with Tim Story again to produce yet another stand out action comedy with Ride Along. “Tim is the man!” proclaimed Cube, “I worked with him on Barbershop, he was fresh in the game then, now he’s a vet with his own movies. Working with him this time around I didn’t have to help him so much (said with a laugh)… He’s a great filmmaker.”  Thankfully the circle was completed after Story’s work with Ice Cube and Kevin Hart separately lead to Ice Cube and Kevin teaming up as a dynamic duo in Ride Along.

Ice Cube shared what it was like working with Kevin. “I love working with Kevin! He’s one of the funniest comedians of the day. On set we had perfect chemistry, instant chemistry. We stuck to the script but we let him ad-lib. You gotta let him riff or you’re not getting the best out of Kevin Hart. So we played with it, we did the dance and I think we got a great movie”. With undeniable chemistry, surprises, and laughs from start to finish you don’t want to miss this film!

Ride Along is in theaters nationwide on January 17, 2014.